Double-Fisting Nats Fan Refuses To Drop His Two Beers, Gets Hit In The Gut By Yordan Alvarez HR Ball 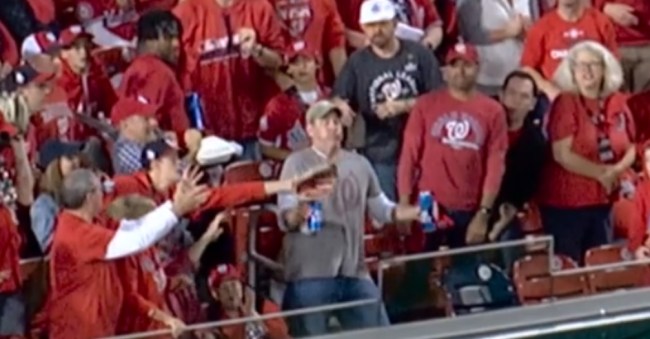 Beer at the World Series is expensive so I understand why fans would choose to get pegged by a ball instead of spilling them.

That’s exactly what happened during tonight’s game 5 when a fan double-fisting beers preferred to get hit in the gut by a home-run ball than to drop his two beers.

Update: Apparently he ended up going home with the ball after all.

Update: He got the ball! pic.twitter.com/81SUN1kvz4

The man is being hailed a hero by the Internet.

Sacrificed his body, didn’t drop his beer, and didn’t throw it back! Random double-fisting dude for the win! #takeitback #weplayloud pic.twitter.com/S2ESQqzD3x

It's been a half hour & I'm still laughing at the guy double-fisting who took Yordan's homer off the gut.😂😂😂 pic.twitter.com/2kpDcwXFdg