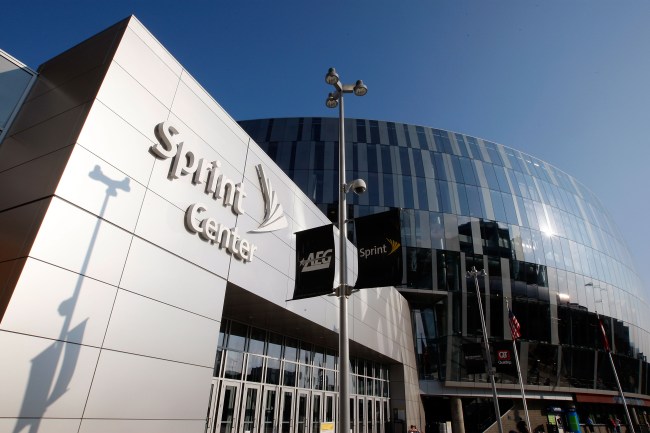 KANSAS CITY, MO - SEPTEMBER 22: A general view of the exterior of the Sprint Center prior to the start of the game between the St. Louis Blues and the Los Angeles Kings on September 22, 2008 at the Sprint Center in Kansas City, Missouri. (Photo by Jamie Squire/Getty Images)

As cities have come to the realization that using public funding to build stadiums and arenas in isolated locations surrounded by parking lots is a losing proposition (and started tightening purse strings), team owners have begun building downtown. They’ve surrounded their new venues with mixed-use real-estate projects capable of servicing the public debt. Retail, office and high-end residential properties now surround urban venues nationwide (at least 10 cities have followed this model); stimulating the local economy and rejuvenating downtrodden parts of cities, as no stand-alone facility ever did. The trend mirrors a greater American urban renaissance (started in ’10), where for the first time in 60 years more people are moving to the city than the suburbs, driving the country’s economic growth.

Fan Marino: Kansas City started this trend with the opening of the Sprint Center in 2007, and is seen as a model of its success; ironic, since no professional franchise calls the venue home (it does host some Big 12 sporting events). Of course, that wasn’t the plan. The Oak View Group built the arena, promising to land a winter sports franchise within 2 years. The planned relocation (Pittsburgh Penguins) fell through and no local ownership group (with interest in purchasing an NHL or NBA team) has emerged since.

Howie Long-Short: The Sprint Center has certainly had an impact on revitalizing the Power & Light district (streetcar line, population up 160%, tax revenue soared), but the project still has its detractors. Dan Coffrin, a former city councilman, called the deal reckless; arguing the city issued debt without a safety cushion. He wasn’t wrong. In 2018, $17 million in tax revenue will be required to service the debt, while the district will only produce $6 million.

Facebook (FB) has hired Eurosport Chief Executive Peter Hutton to lead its multi-billion dollar global sports rights initiative. The move is yet another strong indicator (they bid $600 million for rights to Indian cricket, losing to Star India) that the social networking service sees live sports as a key part of its streaming growth strategy. The hiring appears timely as the deadline to submit bids for the rights to stream the EPL in Europe is Feb 9. Hutton isn’t expected to begin his new role until after the completion of the Winter Olympics though, making Facebook appear to be an unlikely destination for the Premier League now.

Howie Long-Short: Discovery Communications (DISCA) owns Eurosport, the home to the next 4 Olympic Games (through ’24) in most European markets. DISCA paid just $1.44 billion for European rights to the games, across all platforms, which is a fraction of the $7.65 billion NBC is paying for television and online rights to the games through ’32. The company reported Q3 earnings in early November; revenue was up 6% YOY (to $1.65 billion) led by its international portfolio, but net earnings remained flat as U.S. subscriptions continued to decline. CEO David Zaslav said at the time, that the company was looking forward to leveraging the Scripps Networks Interactive portfolio upon the closing of the $14.6 billion acquisition (to occur in early ’18). The company will report Q4 and full-year 2017 financials on February 27th.

Fan Marino: Facebook has decided against bidding on the NFL’s Thursday night package. Noteworthy, as the company has bid on the package in past years and the league’s Sunday (through ’22) and Monday night (through ’21) packages are tied up for the next several years. As for TNF television rights, Fox and Disney (would put games on ABC) are both likely to bid; while CBS & NBC, who shared the rights this year, are looking to pay less (paid $450 million in ’17).

UFC heavyweight champion Stipe Miocic became the most decorated heavyweight champion (record 3 straight title defenses) in UFC history on Saturday night, defeating Francis Ngannou by decision at UFC 220. Following the fight Dana White expressed interest in a fight between Miocic and Daniel Cormier. Miocic may have other ideas. Just days before the fight, JohnWallStreet got the chance to talk with the champ about the title of “baddest man on the planet” and a potential fight with Anthony Joshua.

JWS: You work during the day as a part-time fire fighter. Is that a paying job?  Do you ever wonder if your time would be better spent training?

Stipe: It is a paying job, but I do it because I love helping people out and giving back to my community. I love Cleveland. That was a big reason why I partnered with Modelo; we share a strong sense of community and both value the fighting spirit in and outside of the Octagon.

JWS: New UFC Sponsor Modelo highlights you in a new ad campaign. The campaign focuses on “blue-collar minded” individuals. Does that mean you aren’t in to all the cars, jewels, furs etc. that we see guys like McGregor or Tyson with?

Stipe: You could say that. Being able to partner with a brand that shares the same values in terms of hard work and giving back to the community was one of the big things that attracted me to working with Modelo. I get to tell my story as a firefighter, and more than just an athlete, and that’s an opportunity that doesn’t come around too often.

JWS: You were an accomplished boxer growing up a part of the Golden Gloves program. I saw you challenged Anthony Joshua for title of “baddest man on planet.” Are you serious about pursuing a fight in the boxing ring with him or was that simply a fun idea trying to capitalize on the money Mayweather/McGregor got for their fight?

Stipe: Boxing was a big part of my upbringing. I would love to fight the winner of Joshua and Wilder, but all that matters to me right now is fighting this Saturday; after that, let’s talk.

Fan Marino: LeBron gets all the credit for bringing the Cleveland its first title since 1964, but Stipe beat him to it winning the UFC heavyweight title at UFC 198. I asked him if that bothered him (it would bother me, I’m petty).

Stipe: Not at all. The Cavs had me at a few of their playoff games and even at their victory parade back in 2016. I also met up with a bunch of those guys to cheer on the Indians in the World Series together. What Lebron has done for Cleveland, on and off the court, has been awesome to see and we’re both just trying to represent for our city. We share a mutual vision – for those to see the work we do in our community and inspire them to do better.