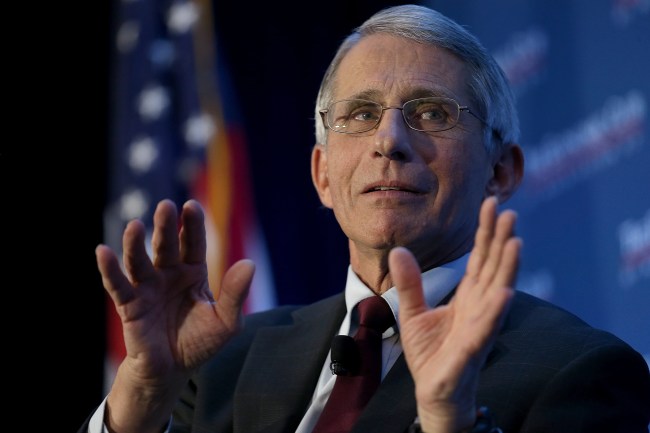 Dr. Anthony Fauci, the director of the National Institute of Allergy and Infectious Diseases, doesn’t seem as optimistic as the MLB about the return of sports happening any time soon.

Dr. Fauci spoke with the NY Times on Tuesday and warned that there isn’t enough access to testing right now for sports to resume.

Dr. Anthony S. Fauci, the leading public health expert on President Trump’s coronavirus task force, said that it might be very difficult for major sports in the United States to return to action this year https://t.co/1yL9gHGKkY

A key variable, Dr. Fauci said in an interview on Tuesday, will be whether the country can gain broad access to testing that quickly yields results. He said that manufacturers had made strides in developing such tests, but not enough for major sports competitions to resume.

Safety, for the players and for the fans, trumps everything,” he said. “If you can’t guarantee safety, then unfortunately you’re going to have to bite the bullet and say, ‘We may have to go without this sport for this season.’ … If we let our desire to prematurely get back to normal, we can only get ourselves right back in the same hole we were in a few weeks ago. … I would love to be able to have all sports back. But as a health official and a physician and a scientist, I have to say, right now, when you look at the country, we’re not ready for that yet.

Not only do teams need testing according to Fauci but they will probably need to isolate themselves from the general population to avoid an outbreak within teams.

And then test all the players and make sure they’re negative and keep them in a place where they don’t have contact with anybody on the outside who you don’t know whether they’re positive or negative.

That’s going to be logistically difficult, but there’s at least the possibility of doing that. In other words, we said that for baseball, get the players in Major League Baseball, get a couple of cities and a couple of hotels, get them tested and keep them segregated. I know it’s going to be difficult for them not to be out in society, but that may be the price you pay if you want to play ball.

Fauci’s interview with the NY Timas came on the same day the MLB were discussing a plan to come back in the Summer and play a shortened season with realigned divisions.

MLB discussing plan to start season with three 10-team divisions, and expanded postseason, with hopes of playing in own home stadiums this summer. https://t.co/aHeNftRZhj