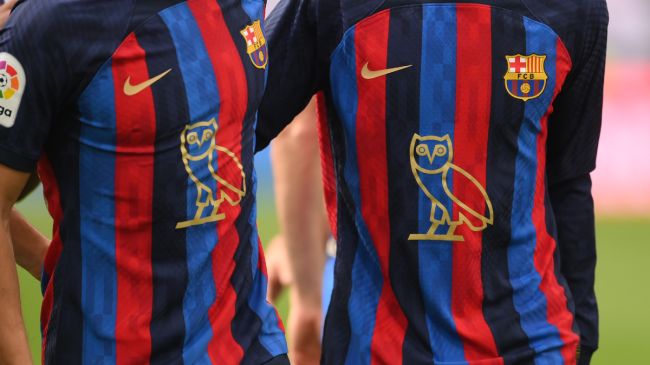 Drake put some serious money on the Barcelona soccer team for its Sunday morning matchup, wagering $833K on the team to take down Real Madrid in LaLiga action.

The team honored the rapper with special jerseys commemorating his music streaming milestone as he became the first artist to hit 50B streams on Spotify.

In exchange he put a large chunk of change on a two-team parlay which involved both Barcelona and Arsenal. The payout on the ticket would’ve dealt out nearly $4M.

Arsenal would land a 1-0 win over Leeds in European Premier League play, but the slip would be killed after Barcelona’s 3-1 defeat against Real Madrid.

FC Barcelona found itself in a 2-0 deficit by the 35th minute, allowing a pair of goals in the first half of action. The win allowed Madrid to take sole possession of first place in LaLiga, remaining unbeaten.

Barcelona, despite doubling up their opponent in attempted shots, couldn’t overcome the early hole. Many immediately blamed Drake for the loss.

Soccer fans said the ‘Drake Curse’ was the reason for Barcelona’s defeat, adding to a long line of Drake’s betting losses.

He’s seen major bets lose across a variety of different sports, at both the collegiate and professional levels.

Just this past year, we saw huge losses in the NCAA Final Four, the NHL playoffs, and the Kentucky Derby. Many believed the rapper had put the hex on the Alabama football team this offseason after sporting some gear ahead of the season’s start.

The Crimson Tide lost to Tennessee over the weekend, pushing them out of the SEC West lead.

After seeing the latest soccer defeat on Sunday, fans rushed to social media to post reactions.

One account said, “The Drake Curse continues,” along with a list of his past losses on the pitch.

Another fan hilariously commented, “Drake watching Barcelona lose 2-0 in the first half after putting $800L on them.” That can’t be a great feeling.

Drake watching Barca lose 2-0 in the first half after putting $800K on them pic.twitter.com/Vh5Ffmp9Vv

This account simply posted, “The Drake Curse is alive and real,” accompanied by a photo of the rapper holding a Barcelona jersey.

The Drake curse is alive and real pic.twitter.com/c01YiBcMSX

One day, he may catch a break. Until then, it’s probably best to fade Drake’s betting picks. Just hope that your favorite team isn’t on his next ticket.