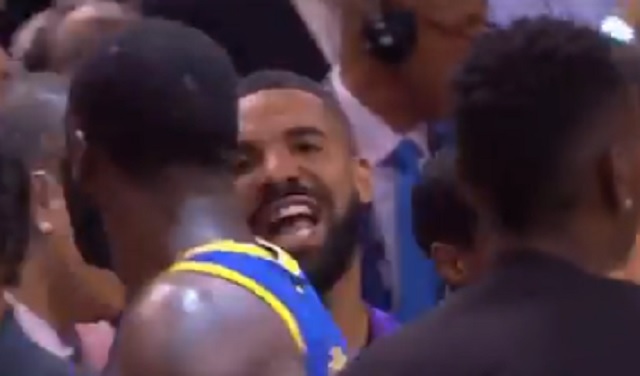 Before today’s Game 1 of the NBA finals Draymmond Green had to told the media that Drake couldn’t both the Warriors with his shenanigans because he wasn’t a player and he can’t shoot.

Asked what he’ll do about @Drake should GSW end up facing Toronto in #NBAFinals, Draymond said, “Drake can’t shoot. Nor can he pass. You ever seen Drake play basketball? I saw a couple highlights. It wasn’t so hot.”

However it did seem like Drake was able to get in the Warriors heads throughout the game.

Drake started off the game by wearing a Dell Curry Toronto jersey.

Then the Toronto rap superstat got into a heated discussion with Steph Curry on the sideline.

And went on to troll Klay Thompson on the sideline.

After the Raptors won the game, Draymond Green got in Drake’s face which led to Drake telling him the Warriors are trash.