Draymond Green Is Trending For Trying To Pants Jaylen Brown, Nearly Getting Tossed In The 1st Half 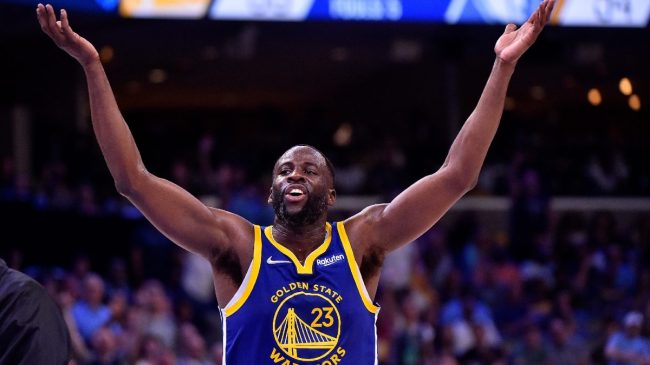 Draymond Green is making headlines once again for his chippy (or dirty) play on the court.

The Golden State forward seems to have come into Game 2 with an agenda. To get kicked out of the contest.

Well, maybe that’s extreme. But he certainly is challenging referees to make calls in pressure situations. Green has been an annoyance on the defensive end of the floor for Boston players, though some think he’s taking it a bit too far.

That chippy play landed him a technical early in the matchup after getting into a quarrel with Celtics big man Grant Williams.

Draymond got a tech after getting into it with Grant Williams

The two players got a bit tangled up, trading verbal shots before Green threw his hand in Williams’s face. That was enough for the refs to pull the trigger.

It came after a play where Green basically tackled Williams away from the ball.

That call wouldn’t keep Green from changing his aggressive play.

Green kept the chippy play going, which nearly led to an ejection before the first half closed.

As the second quarter was coming to a close, Green tried to close out on a three-point attempt by Boston’s Jaylen Brown. The forward wound up committing a foul, falling on to of Brown, propping his feet on top of Brown, then pulling at his pants as the two players got off the floor.

Draymond Green and Jaylen Brown had to be separated after this interaction. pic.twitter.com/pyEdSepMjV

Somehow, the action didn’t land Green his second technical, which would’ve resulted in an ejection.

Fans on social media were livid with the officials’ decision to swallow their whistles.

Draymond after the refs didn’t give him his 2nd tech pic.twitter.com/YMDBbzzy1J

refs: Draymond, you need to chill before we give you a second tech

Draymond kicks Brown, puts both feet on Brown and then shoves Brown but there’s no tech there — GTFOH.

Draymond Green’s been involved in a number of loose ball or jump ball type plays that lead to someone ending up on the ground. If he keeps this style of play up, his night might end early.