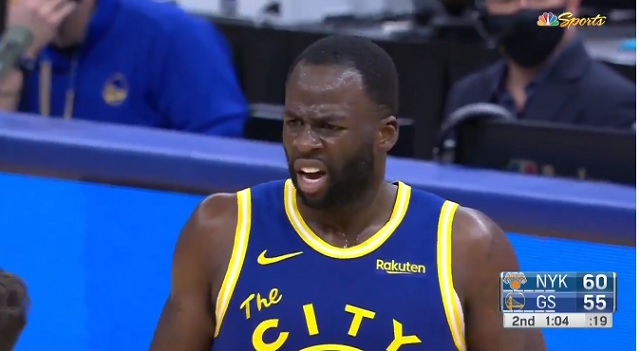 During Thursday night’s Knicks-Warriors game, Draymond was oddly ejected after picking up his second technical foul when he yelled and cursed at his teammate James Wiseman while running up the court following a turnover. Apparently, the referee must have thought Draymond was yelling at him and kicked him out of the game.

Guys, Draymond just get ejected for yelling at his teammate 🤦‍♀️ pic.twitter.com/S3LSob1AwQ

I haven't REALLY turned up an NBA game to investigate audio in a while but I needed to hear what Draymond Green said to get tossed. He yelled "F*** THAT!" to teammate James Wiseman. Then, the referee said: "F*** that, I'm not listening to cursing", and ended his night's work.

For those wondering, here's the play right before the ejection: Draymond Green tries to make an entry pass to James Wiseman, but a miscommunication leads to a turnover. As they get back on defense, Green yells at Wiseman and the refs ejected him! https://t.co/L3VbMNprs9

Warriors fans were angry and blasted the refs for the bogus ejection.

Objectively bad ejection from official, running Draymond Green for briefly yelling at Wiseman, not the ref. Probably will be rescinded tomorrow. But this is also the risk of getting that early first T in any game. One ref error away from being banished. https://t.co/3mbeLZy0kL

Draymond gets ejected for yelling at James….his own teammate, cmon man let’s do better

This is hilarious. Draymond ejected for cursing out James Wiseman — his TEAMMATE — for a turnover. NBA officiating this season has been something special.

that ref soft for ejecting Draymond