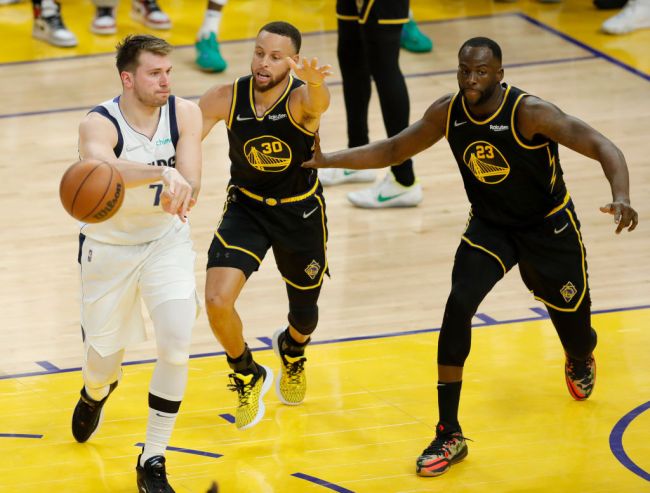 Draymond Green and the Golden State Warriors are currently locked in a Western Conference Finals battle with the Dallas Mavericks. While the Warriors won Game 1 of the series in dominant fashion, it seems that isn’t going to deter Draymond from heaping praise on Mavericks star Luka Doncic.

On his podcast, Draymond spoke about the way that Doncic plays and revealed that it reminds him of one of the greatest to ever play the game. According to Draymond, playing against Luka is a lot like playing against LeBron James.

“One of the main, glaring similarities that stick put at you is how those two guys can manipulate a defense and control the pace of the game. At their size with their passing ability and the way they can put pressure on the rim, on the defense and with the vision that they have — they’re a lot alike.”

There are certainly plenty of similarities to be found for the 2. Neither wasted any time becoming stars in the league, with both averaging over 20 points per game in their rookie seasons. Both men have racked up triple-doubles throughout their careers. Most importantly, both men are absolute matchup nightmares.

Interestingly, LeBron also recently stated that Luka Doncic was his favorite current NBA player. If he continues playing at the level he has so far in his very young NBA career, Luke is going to be many people’s favorite player.

Luckily for Draymond, he knows a thing or two about beating LeBron in the playoffs. Maybe that will help the Warriors as they look to get themselves back to the NBA Finals after missing out for the last couple of seasons.