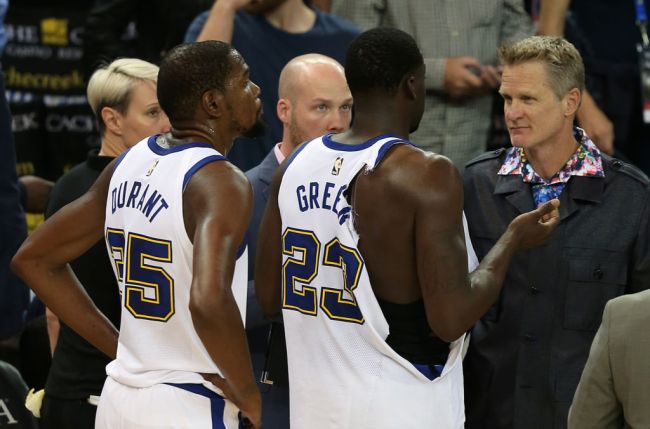 Kevin Durant and Draymond Green sat down on Wednesday to discuss their infamous sideline blowup back in 2018 and made some surprising revelations about what went down behind the scenes.

For those that don’t remember back in 2018 Green and Durant got into a yelling match on the sidelines after Green didn’t pass Durant the ball at the end of a game against the Clippers.

According to various reports, Green called Durant a “bitch” and went on to tell him “We don’t need you. We won without you. Leave.”

During his sit-down interview with Green on Wednesday, Durant revealed that he decided to leave the Warriors because he didn’t like the way coach Steve Kerr and GM Bob Myers handled the aftermath of the altercation.

“In my opinion, they f–ked it up” 👀@Money23Green and @KDTrey5 call out Bob Myers and Steve Kerr for how the Warriors handled their infamous argument vs. the Clippers in 2018

“It wasn’t the argument it was the way that everybody, Steve Kerr acted like it didn’t happen,Bob Myers tried to just discipline you and put the mask over everything, I really felt that was such a big situation for us as a group, the first time we went through something like that, we had to get that shit all out. I remember watching “The Last Dance” and when Scottie (Pippen) didn’t go into the game, the whole team in the locker room told Scottie it was fucked up that you did that. We needed that, we just needed to through all the shit out on the table”

Green concurred with Durant’s assessment and blasted the Warriors for how they handled the situation.

“They tried to tell me you need to apologize, and I told them I’ll talk to K but ya’ll aren’t going to tell me what I need to say and they went on for an hour and forty-five minutes saying a bunch of bullshit and ultimately they realized alright we’re not getting through to him, we’re going to try again in the morning. And so we met the next morning and they said alright, you slept on it, are you ready to apologize? And I told them right then and there, I said ya’ll are about to fuck this up, I said that the only person that can make this right is me and K and there’s nothing that ya’ll can do and ya’ll are going to fuck this up, and in my opinion, they fucked it up, and they told me right then and there that we’re going to suspend you for this game and i literally laughed in their face and Bob (Myers) said to me, wow that was not the reaction I was looking for or expecting.”

NBA fans had interesting reactions to Green blaming Kerr and Myers over how they handled the Durant situation.

If I was Steve Kerr and Bob Myers I would try to speed up the process of getting Draymond out of there and I been saying that for two years. It’s gone be hard tho cuz of that bad ass contract he got tho.!

This is super interesting on so many levels. But how does this go over when Dray goes back to talk to Steve Kerr and Bob Myers?!?? I’m here for all the #Warriors drama Lolol https://t.co/lKmA5e91rU

Dray literally blamed someone else for failing to apologize to KD