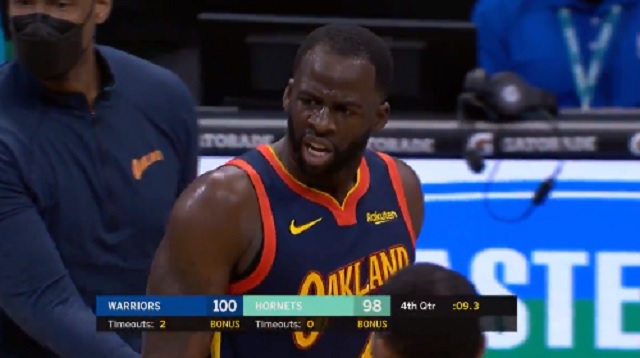 Draymond Green couldn’t control his emotions and cost his team the game vs the Hornets on Saturday night.

With the Warriors up two points and nine seconds left to go in the game, Green picked up two technical fouls for arguing with the refs because he felt the Hornets were unjustly allowed to call timeout after a jump ball.

Draymond Green was ejected with nine seconds left and a two-point Warriors lead.

The Hornets hit both technical free throws, got the ball back, and Terry Rozier went on to hit the game-winning shot.

After the game Warriors coach Steve Kerr criticized his star player for costing his team the game.

Kerr on Draymond: "He crossed the line. … We know we wouldn't be the team we are without him. But that doesn't give him permission to cross the line."

Eric Paschall said Draymond told the team the loss was his fault, that he took ownership in the locker room

EP: "We gon' be alright. All the pieces are going to come together soon."