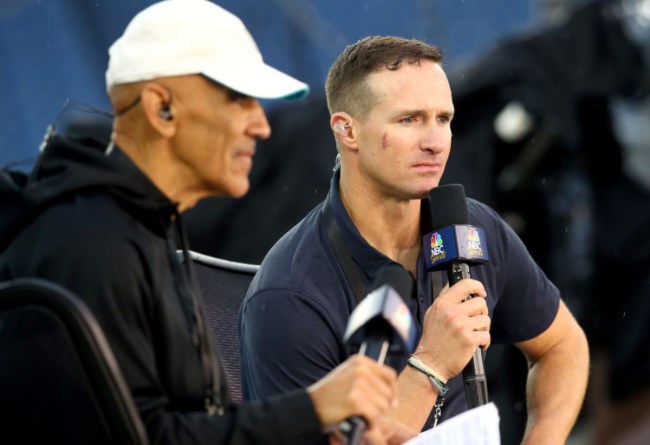 This past NFL season was Drew Brees’ first with NBC, and it could very well be his last.

According to Andrew Marchand of The New York Post, Brees could be leaving NBC for FOX Sports. The former New Orleans Saints quarterback could be in the mix for the No. 1 analyst job at FOX after Troy Aikman jumped ship to ESPN earlier this year.

Greg Olsen is reportedly the leading in-house candidate for the role to sit next to Kevin Burkhardt in the FOX booth, but Brees’ name has been brought up.

“Even if Brees leaves NBC for Fox, Olsen could still be promoted to Fox’s lead team with Kevin Burkhardt,” Marchand reports.

“In that scenario, Brees would team with Joe Davis or Adam Amin on the No. 2 team. Brees and Olsen were both rookie NFL analysts last year.”

Another player in this scenario is Amazon, who is reportedly interested in Brees as well. If Amazon and FOX were both to sign Brees he could do work for Amazon during ‘Thursday Night Football’ and call games for FOX on Sundays.

Brees’ preference is to actually call games as opposed to doing studio shows.

Perhaps FOX is looking to keep the QB-in-the-booth trend going with CBS having Tony Romo on its call and Aikman with ESPN.

The longtime pairing of Joe Buck and Aikman will call ‘Monday Night Football’ for ESPN.

Aikman was the first of the two to make the jump from FOX to ESPN this offseason before Buck followed. Buck’s new contract is reportedly a five-year deal between $60-$75 million.