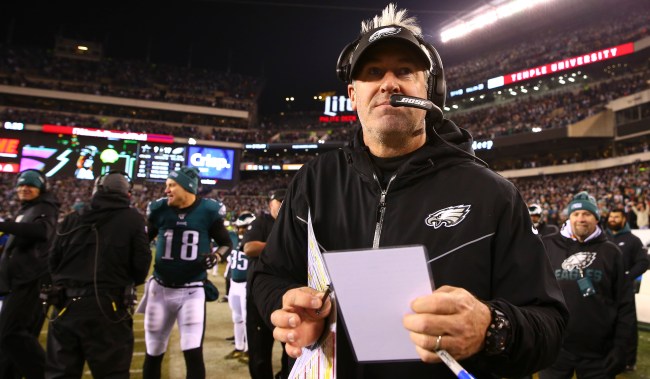 Last night, the Dallas Cowboys completed their incredible season-long capitulation by losing to the Philadelphia Eagles by a score of 17-9, thus ceding control of the NFC East to their division rivals.

Following their massive home win over Dak Prescott, Jason Garrett, and the Dallas Cowboys, the Eagles now possess the inside track to winning the NFC East, as they control their own destiny. With a win against the New York Giants next weekend, the Eagles will make the NFC playoffs as NFC East champions.

Given how big last night’s victory was, you can imagine that party scene that in Philly was something else, as the Birds put together their most complete performance in weeks to take control of their division.

Naturally, because Philly is Philly, that aforementioned party somehow spilled its way into head coach Doug Pederson’s post-game press conference, as drunken, beer-wielding fan somehow made his way into the presser.

VIDEO: “This will be on SportsCenter” -Doug Pederson

It would appear a fan got lost on his way out of the Linc…@6abc pic.twitter.com/UMpZZsztbL

In order to clinch the NFC East — which would be their second division title in three years and their first since winning the Super Bowl — the Eagles either need to beat the Giants in New York next week or hope that the Dallas Cowboys lose to the Washington Redskins.

As for Dallas, they need to take care of business against the Redskins and pray for an Eagles loss at the Meadowlands at the hands of Danny Dimes, Saquon Barkley, and the New York Giants. Regardless of what happens, with the NFC East, next weekend’s game will likely be Jason Garrett’s final as the Dallas Cowboys head coach.