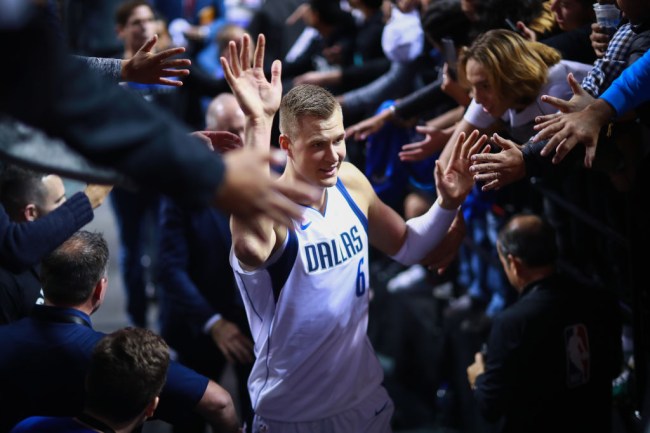 One particular fan had themselves quite the night at the Celtics – Mavericks game on Wednesday. He tied on a pretty good buzz then decided to make his way to the media room for Rick Carlisle’s postgame presser, you know, a totally normal move.

Somehow he made his way through security, found a spot in the room and even got a word in among the reporters in the room. His Mavericks may have lost 109-103, but he was still proud of his team.

It appears the guy is a happy drunk, which is a good thing. It may have been even funnier though if he was super pissed off about the loss and crashed the presser to rip on Carlisle, but he was aware of the unique situation the Mavs are in.

Props to the fan for going for it, but I’m going to go out on a limb here and say security around the media area may be a bit tighter from here on out at the arena.

Wednesday’s game marked the second straight with Luka Doncic sidelined with an ankle injury. It’s tough to win games without your superstar guard, but Dallas kept things interesting against a strong Celtics group and the drunken fan was proud of his guys.

The Mavs were able to hit 15 threes on Wednesday night and out-assisted the Celtics by a count of 23-13. Kristaps Porzingis led the way for Dallas with a double-double picking up 23 points and 10 rebounds going 8-for-19 from the field.

Dallas is now 1-1 without Doncic on the floor after snapping the Bucks’ 18-game winning streak in the game prior.