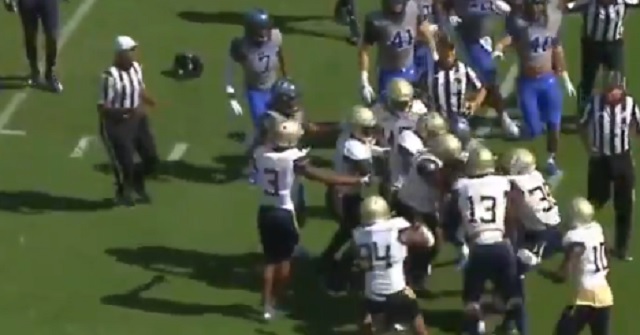 Things got a bit heated between the Duke Blue Devils and Georgia Tech Yellow Jackets during their game on Saturday.

Late in the second quarter following a Georgia Tech touchdown, the two teams got into an all-out brawl after the kickoff.

Duke and George Tech players came to blows after a heated exchange during the kickoff. pic.twitter.com/7hmEV5k9gR

The internet of course laughed at the two “smart” nerdy schools getting into a fight with each other.

Now Duke and Georgia Tech are getting into a brawl??? Nerd schools are fed up today!

Vanderbit, Georgia Tech, and Duke all involved in on-field scraps today? Are the nerds turning savage?!?!?? 🤣🤣

Georgia Tech linebacker Victor Alexander was ejected from the game. Duke’s Jacob Morgenstern was called for an unsportsmanlike conduct penalty, but he was not thrown out of the game.