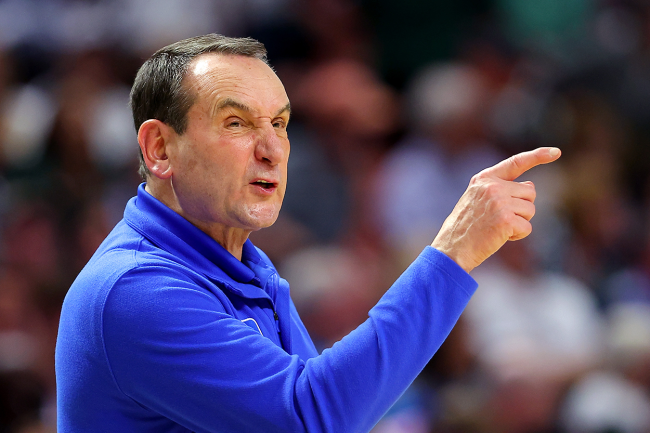 Duke head basketball coach Mike Krzyzewski is wrapping up the final season of his impressive 48-year career. The 75-year-old is set to retire at the end of the season and his legacy will be two-fold.

While he is undeniably one of the greatest coaches of all-time, there are a lot of people who do not like him. Krzyzewski has always been short, often evades the truth and can be very self-centered.

Some of his ‘holier-than-thou’ attitude is earned, considering his record of five national titles, 12 Final Four appearances and 28 combined ACC regular season and tournament championships. However, much of it is considered pompous and that’s okay, because not everybody has to like everybody.

The perfect example came on Sunday. Prior to the Blue Devils’ game against Michigan State, Coach K made himself look silly.

At some point during March Madness, Krzyzewski was quoted saying that “the only banners that are up at Duke are championship banners.”

That simply isn’t true. During the CBS piece that included Coach K’s quote, it proved him wrong and completely contradicted his statement.

Immediately after using the championship banner quote, the screen cut to an image of a self-celebrating banner for Krzyzewski. The banner honors the fact that he has the most career victories in NCAA Division I history. It is not a championship banner.

Take a look at the quote and the banner in the piece:

CBS’ editor deserves a raise for that savage cut. It is a safe bet that he isn’t a Duke fan.

Naturally, the internet had a field day and Coach K proceeded to get — rightfully — roasted.

The only banners that are up at Duke are not championship banners. There is literally one that is only about Coach K.

Did Coach K think he was right? Did he know he was wrong and lie anyway? Has he forgotten about his banner?