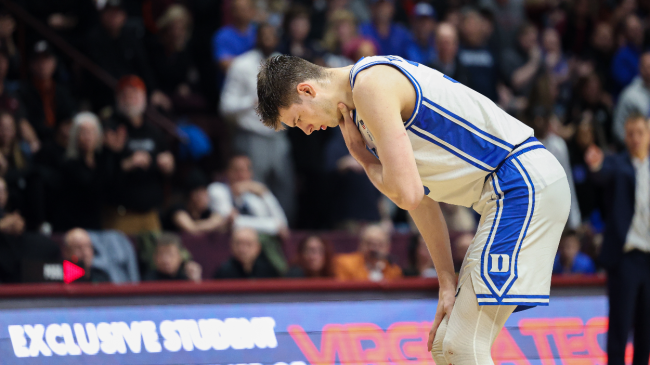 Controversy surrounded the end of a game between the Duke Blue Devils and Virginia Tech Hokies on Monday night. A Duke player was punched after the game-winning shot swished through the basket.

No foul call was made, leading to quite a stir online. Fans and media began to debate whether the refs got it right, or if the Blue Devils should’ve had an opportunity at the charity stripe.

With the game tied at 75-75, Virginia Tech guard Michael Collins, Jr. connected on a jumper with just 13.3 seconds remaining in play. Excited about his team regaining the lead, he swung his fist in celebration.

Unfortunately, the act ultimately resulted in an inadvertent punch that landed to the neck of Duke player Kyle Filipowski. Filipowski would have to be helped off the court, and eventually threw up on the sidelines.

“Yeah, he just elbowed me right in my Adam’s apple. I couldn’t breathe for a minute, but I just needed to throw up and I was good.”

Here’s another angle of the shot to the throat.

No foul on a celebratory punch to the throat? 🤔 pic.twitter.com/RcXQCwwtZO

Despite the clear contact, no foul was called due to the accidental nature of the play. And that no call would prove costly for the Blue Devils.

Rather than head to the foul line for free throws, they were forced to run an offensive set. A missed three-point attempt essentially sealed Duke’s fate, and the Hokies would go on to win, 78-75.

Many on social media quickly debated whether or not the officiating crews got the call right.

Analyst Seth Greenberg said, “Crazy last play. The call was adjudicated incorrectly. There does not have to be intent. If there was intent, it would be a flagrant 2 but because of the contact above the shoulder it must be a flagrant 1.”

Jeff Goodman wrote, “Just talked to two of the best referees in the business about the no-call on the on Collins’ incidental hit on Filipowski: ‘I would say play on. He had no idea knowing anyone was there. No call.’ Another ref: ‘I agree. No call.'”

Duke fans were heated with the no call, with one fan sharing a message that was felt by the entire fanbase. He said, “A Duke player does this, he’s thrown out, suspended, and on the FBI’s most wanted list. This is a horrible thing to allow. Moral of the story: if you want to punch an opponent, act like you’re celebrating…”

Whether intentional or not, there are many who believe that Virginia Tech should’ve been penalized for the punch on the Duke player. As it stands, no call was made, and the Hokies escaped with an important ACC win.