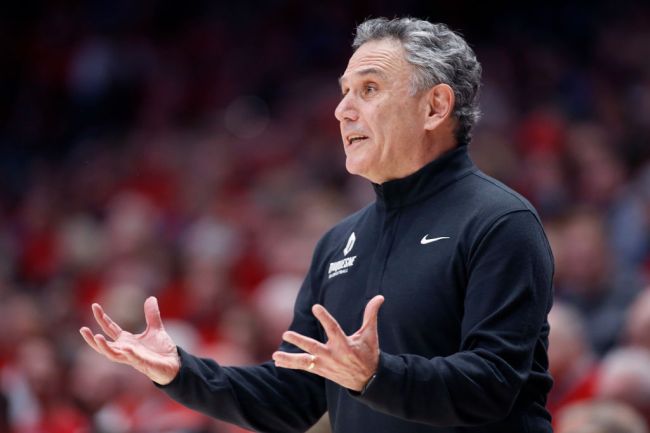 Duquesne’s 6-foot-7 freshman guard Toby Okani threw down a massive jam against St. Bonaventure on Friday. He rose well above the rim, dunked with authority and stared down his opponent upon landing. It was a vicious attempt and relishing in the moment was well-deserved. There was only one problem— the Dukes were losing by double digits and went on to lose by 16, effectively ending their 2021 season.

Okani’s dunk brought Duquesne to within 10 after falling behind by more than 20 at halftime, but his stare down set off a chain reaction that went against his team’s favor. When St. Bonaventure called a timeout to stop the run, its opponent’s bench was fired up and couldn’t stop running its mouth. That pissed the Bonnies off and both sides left the sideline for a short skirmish on the court.

THINGS ARE GETTING CHIPPY!

Duquesne and St. Bonaventure clear the benches for the first scuffle of March 👀pic.twitter.com/7GNF1djg6g

The Duquesne bench is into it as the Dukes go on a 9-0 run. The benches cleared after Schmidt called timeout, with several Bona players across mid court. Here’s what I got⤵️ pic.twitter.com/5OCh2QiQNZ

It took nearly 30 minutes to get the situation sorted out, a few of those involved received technical fouls and one of St. Bonaventure’s seven-man rotation players was removed from the game for being the first to leave the bench. The stoppage in play killed all of the Dukes’ momentum and Okani’s team was served a big piece of humble pie. Out of the pause, Duquesne made only one of their 16 field goal attempts while their opponents couldn’t miss. St. Bonaventure responded with an 18-3 run and won the game 75-59 to advance to the Atlantic 10 Conference tournament semifinals.

There are many occasions in which a stare-down dunk is warranted and Okani’s attempt was right on the border. Given his team’s recent run up until that point, it should qualify under the acceptable stare-down, but what went down after was embarrassing. Duquesne’s bench started a scuffle and then the Dukes proceeded to get blown out. That’ll sting.