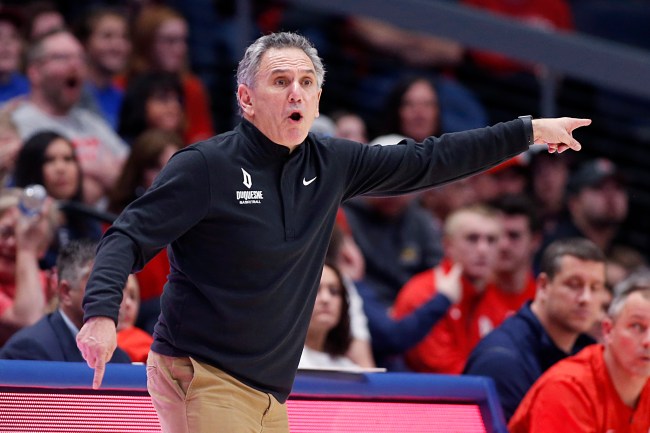 Saturday’s college basketball game between Duquesne and Dayton was amongst the bigger A-10 games thus far this season. As a result, the Dukes did their best to get people to the game, but nobody did.

The official twitter account of the Red and Blue Crew, the student section for the university, tweeted out a request on Thursday afternoon for students to show up and show out on Saturday. The goal was to “white out” the Cooper Fieldhouse.

Massive game at 12:30 on Saturday. We need big time support from the student body! #GoDukes🎩 pic.twitter.com/OY67uVgWAd

Here is what it would have looked like if people had showed up. It is one of the best atmospheres in mid-major basketball when the stands are packed and people are rowdy.

Student attendance of 799. Absolutely insane atmosphere tonight. Let’s do it again on Saturday at 7:00!! #GoDukes🎩 pic.twitter.com/tcgboUSnvH

However, that did not end up happening against the Flyers. Like, not even close.

Here was the scene during warmups prior to tipoff:

There was a total of 11 students there early. Not great.

By the time the game got rolling, The Red & Blue Crew tried to set the record straight about student attendance, but did themselves absolutely no favors. They tweeted out a photo of the crowd with the caption “stop the cap.”

It was not much better. In the photo, there was an undeniable increase of people in the seats. Just not enough to be bragging.

Now, during December and January games, there is always the possibility that student have yet to arrive back on campus. That was not the case in Pittsburgh on Saturday. Classes began on Wednesday, three days prior to the game.

There was no excuse. Awkward.

And to make matters worse, the home team got mollywhopped. Duquesne lost to Dayton by 20 points.

Bad day to be a Duke.