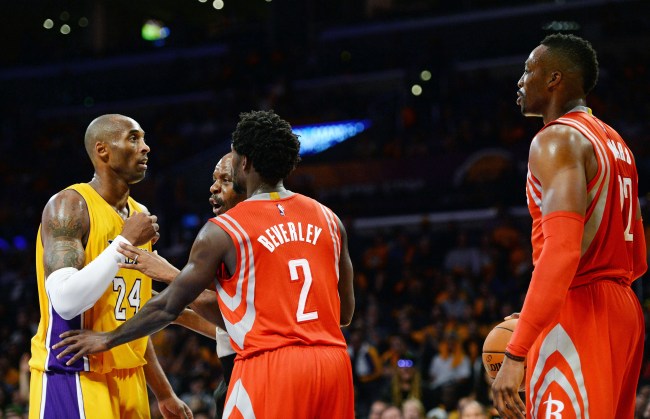 Dwight Howard was once one of the most dominant big men in the NBA, as the former No. 1 overall pick won three Defensive Player of the Year Awards and was a perennial All-Star selection. Unfortunately, somewhere along the road, he just sort of stopped producing like a superstar, battling injuries, inconsistency and, if we’re being honest, an inflated ego that seemed to hold him back.

Although Dwight Howard has accomplished a lot during his NBA career, one thing that many people probably remember was his beef with Kobe Bryant. Remember, the two played together for a season with the Los Angeles Lakers in 2012-13, with Howard cast as Shaquille O’Neal 2.0 to pair alongside Bryant. It didn’t quite work that way, though, as they both battled for superiority in the locker room, and just couldn’t quite mesh together.

The beef took a bigger turn when, during the 2013-14 season in Dwight’s return to play Kobe and the Lakers, Bryant famously called Howard “soft” following a little altercation during the game. Obviously, that term’s one of the last things any athlete wants to hear, and, while Dwight Howard may not have liked it at the time, he told FS1’s Kristine Leahy that he now understands what Kobe meant — and even thanks him for doing it.

“I kinda hated him for saying that because I looked at it the wrong way. I think he was more so talking about my mentality…not how I am on the court. And I didn’t realize that because all the noise surrounding him saying I was soft. And I hated him. I hated him for that moment.”

“Everybody reaches different levels of maturity at different times. I think at that time I was ignorant to the level that he was at. So I appreciate you, Kobe. Thank you for saying I was soft. I didn’t realize what you meant until now.”

Considering Bryant was ready to pass the keys to the Lakers franchise to a then superstar talent like Dwight Howard — who wasn’t serious enough, in Bryant’s mind — fueled the diss during the game. And, although Howard can look back on the situation now, six years later, and realize what Kobe was trying to do is commendable, but just a little too late.