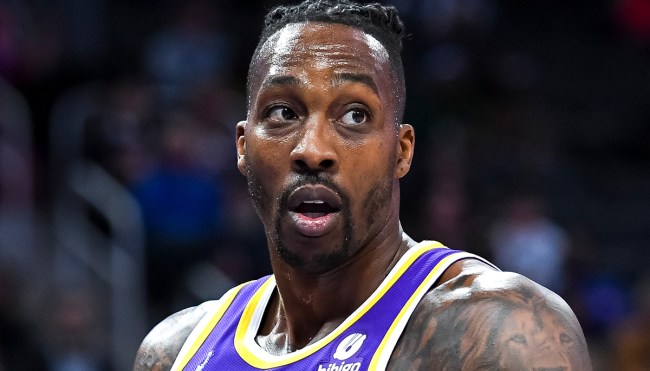 Professional wrestling might not be a “real” sport, but anyone who thinks people who make a living in the squared circle aren’t real athletes is absolutely delusional based on the amount of talent required to do what they routinely pull off with ease.

After all, some of the biggest names in WWE history honed their skills in different arenas before becoming superstars. For example, Dwayne “The Rock” Johnson and Goldberg both made a name for themselves on the gridiron before making a bigger name for themselves with the organization, while Brock Lesnar and Kurt Angle were both wildly accomplished amateur wrestlers before trading the mat for the ring.

Now, it appears we could add a new name to the list of athletes who’ve made the leap to pro wrestling in the form of Dwight Howard, who is currently in search of a new home after capping off his 18th season in the NBA with the Lakers last year.

There’s a chance the 36-year-old big man could come back for another campaign, but it would appear the free agent has already begun to eye a backup plan after he made an appearance at a WWE tryout in Nashville on Thursday ahead of Summerslam and cut a pretty solid promo as “Sho’nuff” (a nod to a character of the same name from the martial arts cult classic The Last Dragon).

Dwight Howard discusses a potential leap to the WWE

Following his appearance, the 6’10” veteran chatted with Arash Markazi and said he still wants to play basketball but was definitely interested in pivoting if he can’t find a suitor before the start of the season.

Dwight Howard said he would like to play in the NBA next season but is ready to transition and join the WWE if that does not happen. His NBA career began in Orlando and he said he’s open to beginning his WWE career in Orlando where the WWE Performance Center is located. pic.twitter.com/VnT0bA1LCB

“I think it is something that’s in my future. I love the WWE. I love wrestling…Hopefully one day in the future I’ll actually be in the ring wrestling and holding up the belt. That would be amazing.

I would love to play in the NBA. Obviously, that’s where I’ve been my whole entire life. I love basketball. It’s my passion. I still have years left in me. So I would definitely love to play and end my career on a high note, and then transition to the best business in the world.: the WWE.”

I guess we’ll just have to wait and see what happens.