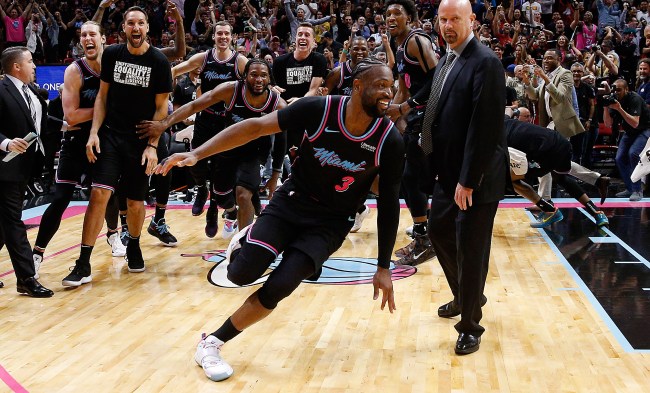 Do Dwyane Wade and Dirk Nowitzki really have to retire? (In Dirk’s case, apparently the media and fans are the only ones who believe that he is, not Dirk himself.)

These two guys have proven this year that even at their advanced ages of 37 and 40 they each have still got game.

This was never more evident than on Wednsday night at the end Miami’s 126-125 win over Golden State. A win that happened because old man Wade knocked down the most unlikely buzzer-beater circus three we’ve seen all year.

Man, if that doesn’t give you chills you need to just stop watching sports.

Bro had his initial shot blocked not once, but twice. If you look closely, you’ll see Wade had his shot blocked by both Durant AND Jordan Bell before nailing the game-winner.

Following the game, Wade shared a story and shouted out Kobe Bryant, thanking the Mamba for “showing him the way.”

Wade, who finished the night with 25 points (going 5-for-8 on threes) and seven rebounds, heads to Houston on Thursday for a game against the Rockets. His opponent in that game, Chris Paul, doesn’t want him bringing any of that magic with him to Clutch City.

Aight now @DwyaneWade…don’t come down to Houston with that nonsense tomorrow night!! 😂🤣😂 #OneLastDance

Seriously now, do they really have to retire?