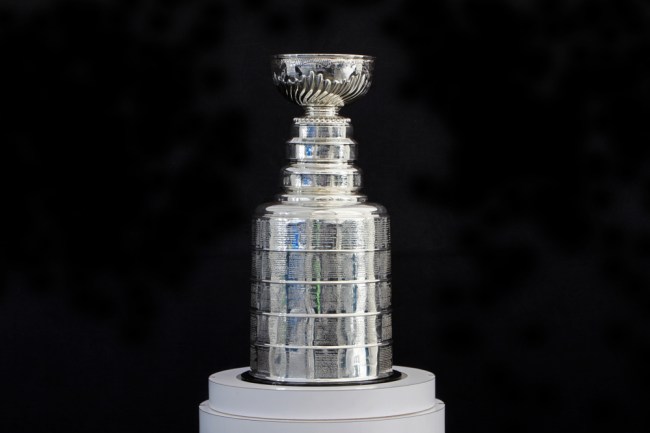 The 2018 Stanley Cup Playoffs kick off on April 11th with three games and then five games on the 12th. The current odds in Vegas have the Nashville Predators as favorites to win the 2018 Stanley Cup Finals (8/1), followed by the Tampa Bay Lightning (my team) at 5/1, the Penguins at 6/1, the Winnipeg Jets at 8/1, and Boston at 9/1. Playoffs hockey is the BEST time of the sports calendar because it features the most face-paced action there is.

I invite any of you bros who get hyped for playoffs hockey to follow along with me on Twitter at @casspa as I’ll be at Games 1 and 2 in Tampa rooting on my hometown Tampa Bay Lightning and then I’ll probably be in the stands next Wednesday in Newark to watch them play because I’ll be up at our BroBible NYC offices for a few days…But how far will the injured captain Steven Stamkos and the Bolts make it?

I believe the Lightning can win it all and hoist Lord Stanley’s trophy after the Finals but the EA SPORTS NHL® 18 Stanley Cup® Playoffs simulation predicts otherwise. This year’s EA SPORTS Stanley Cup Playoffs sim makes a pretty bold prediction and it has the Stanley Cup going to Canada after two MAJOR upsets in Round 2.

Here’s what the EA SPORTS NHL® 18 Stanley Cup® Playoffs simulation churned out: Winnipeg Jets are Stanley Cup Champions after a game 7 win against the Boston Bruins: 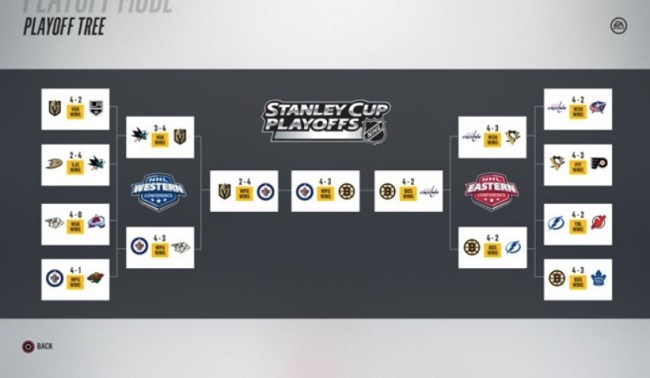 WESTERN CONFERENCE
– The best match-up of the entire Stanley Cup® Playoffs happened when the Nashville Predators and Winnipeg Jets battled it out in the second round. The Jets narrowly edged the Predators in seven games and it seemed like whoever won this pivotal match-up would go on to win the Cup
– The Vegas Golden Knights proved that their regular season success wasn’t just a fluke, as William ‘Wild Bill’ Karlsson and Jonathan Marchessault led the team to the Western Conference Final before exiting out in Game 6 to the eventual Stanley Cup Champion Winnipeg Jets.

EASTERN CONFERENCE
– The Boston Bruins were led by rookie defenseman Charlie McAvoy through two tightly contested series against the Toronto Maples Leafs and Tampa Bay Lightning. The top line of Patrice Bergeron, Brad Marchand and David Pastrnak provided the majority of the offensive punch.
– After many years of failing to get past the second round, the Washington Capitals managed to reach the conference final against the Bruins after they defeated the Pittsburgh Penguins in Round 2. Alex Ovechkin was a scoring machine the entire post-season, however the Boston Bruins were able to overcome his offense and the Caps were sent home in the third round.
– The Pittsburgh Penguins failed to three-peat as Stanley Cup® Champions. The Penguins struggled to produce offense all playoffs long, and eventually were overpowered by the Washington Capitals. (via)

The Washington Capitals have to make it past Round 2 AT SOME POINT in Ovi’s career, right? Wrong.

Both of the #1 seeds (East and West) losing in the 2nd Round? Fake news.

The Stanley Cup won by a Canadian team for the first time in 25 years? Not going to happen. Despite these EA Sports sim results, Canada’s best shot to win the Stanley Cup this year comes in the form of the Las Vegas Golden Knights whose roster is over 60% Canadian.

For GIFs, details about MVP and top goal scorers, and more from the EA SPORTS NHL® 18 Stanley Cup® Playoffs simulation you can click that link and head over to EA’s website!