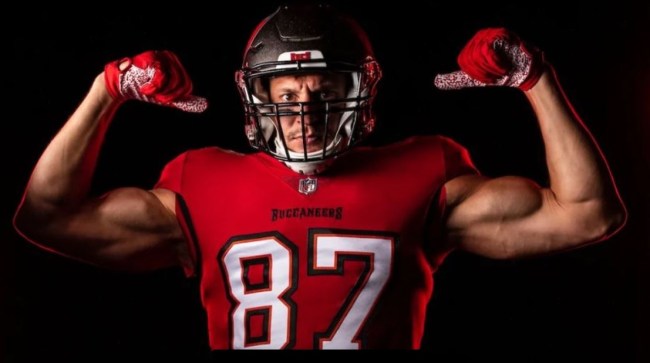 Every year EA Sports rolls out its Madden player ratings and every year people take issue with them.

This year it seems like everyone is angry about Rob Gronkowski’s rating. Despite the fact that Gronk hasn’t played a snap of football for over a year, the people over at Madden decided to give him a 95 rating and ranked him within the top tight ends in the game.

Of course, fans were outrage with Gronk’s rating and took to Twitter to crush the game developers for it.

Wait so gronk is a 95 in madden, but the MVP and cover athlete is a 94 pic.twitter.com/fftO1DoQbT

I’m completely done with @EAMaddenNFL y’all don’t know football and don’t look at stats y’all meat riding gronk who didn’t even play last year and you put him at a 95 over @ZERTZ_86 🤨🤦🏾‍♂️y’all trippin https://t.co/MCNT3MH0Lc

Why the hell is gronk a 95 smh He should be low 80’s to start the season. THIS MAN MISSED THE ENTIRE LAST SEASON AND YOU PUT HIM HIGHER THAN SO MANY BETTER TE’s WHAT THE pic.twitter.com/Idv4EtjmzL

Greg Olsen top 10? Gronk a 95?? This might be the worst one yet pic.twitter.com/AKetMKEgnq