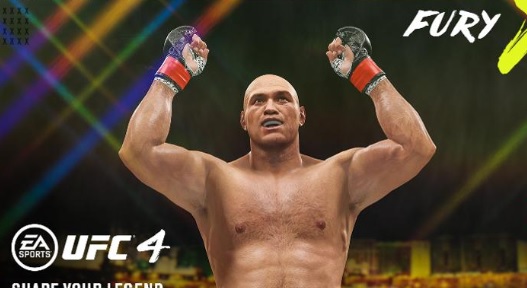 EA Sports highly anticipated UFC 4 is coming very soon to consoles near you.

Before Saturday night’s UFC 251, EA dropped the trailer for the upcoming game that will feature Jorge Masvidal and Israel Adesanya as the cover athletes.

On Fight Island and on the cover 💪 Jorge Masvidal and Israel Adesanya are your #UFC4 Cover Athletes 🔥🔥🔥@GamebredFighter @stylebender pic.twitter.com/YHg81EMUax

The trailer reveals new fight settings, including The Kumite, The Backyard, UFC Apex and Action Avenue.

Boxers Tyson Fury and Anthony Joshua were also revealed to be playable characters.

🎮 Anthony Joshua and Tyson Fury will both feature as playable characters in the new EA Sports UFC 4 game, which is coming out on August 14th. pic.twitter.com/GOd08cbwXR

The game will be exclusive to PS4 and Xbox One and will be released on August 4th but it’s currently unclear if the game will be available on next-gen consoles.

“As far as the next-gen consoles are concerned, we’re really excited about that technology and what it’s going to bring to the industry,” says producer Nate McDonald. “But our current goal as a team is to provide the best fighting game experience available to our players at launch in August on PS4 and Xbox One. We are exploring opportunities [for next-gen], but there is nothing to share right now.”

“If both consoles support backwards compatibility for gen-four games then, presumably, fans will be able to play UFC 4 on their gen-five consoles,” adds creative director Brian Hayes. “We haven’t yet had an opportunity to test this out and determine whether any additional development work is required to leverage backward compatibility, but we hope to see UFC 4 playable on gen-five hardware using that feature.”