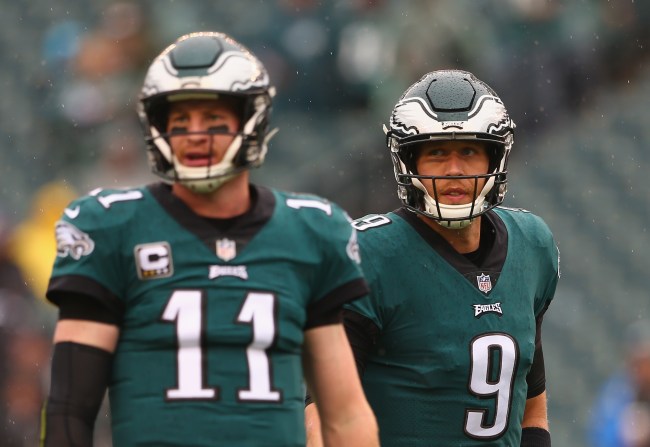 There’s apparently a chance that Carson Wentz gets dealt soon and that is his former teammate Nick Foles is involved.

On Saturday afternoon, ESPN’s Adam Schefter revealed that the Eagles were getting close to trading Wentz and the deal should be finalized in the coming days.

Eagles are expected to trade Carson Wentz in the coming days in what would be the latest blockbuster QB deal to rock the NFL, sources tell @mortreport and me. The most pertinent questions now become where, when and for what. But it could happen as early as this week.

The Philadelphia Eagles are expected to trade Carson Wentz in the coming days in what would be the latest blockbuster quarterback deal to rock the NFL, league sources tell ESPN.

The most pertinent questions now become where, when and for what. But it could happen as early as this week, per league sources, even as the Eagles continue to insist to other teams that they would be happy to bring Wentz back to Philadelphia.

The Eagles are said to be looking for, in the words of one well-placed source, “a Matthew Stafford package” in return for Wentz. The Lions traded Stafford to the Rams last weekend for a third-round pick this year, two future first-round picks and quarterback Jared Goff, the player selected directly in front of Wentz as the top two picks in the 2016 NFL draft.

Eagles beat writer Natalie Egenolf went on to report that the Bears were close to trading for Wentz and that the deal will likely include Foles, the player who won the Super Bowl in Philadelphia during Wentz’s absence due to injury.

Source is telling me Bears deal for Wentz is close. Foles is speculated to be included with another offensive player and a first rounder. Buckle up.

Update: Tarik Cohen appears to be refuting Egenolf’s report that he’s getting traded to the Eagles in a deal for Wentz.

Lemme clear this up real quick . Just got off the phone wit my HC and GM , bears fans we locked in🤞🏾 don’t worry . 💯 people say anything nowadays man .