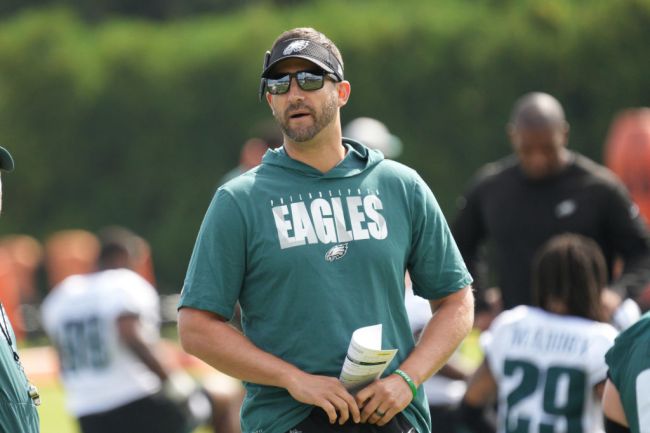 Move over Bill Belichick, Nick Saban, and Jim Harbaugh, there’s a new sheriff in the town of coach speak and his name is Nick Sirianni.

The 40-year-old head coach of the Eagles is putting on a clinic when it comes to mottos and team messages in his first training camp as an NFL coach. His go-to word through the first week of camp has been ‘attack.’

Sirianni doesn’t just want the Eagles attacking on the field, in the weight room, and in the film room, he wants his guys “attacking rest” as well. I’m not sure how someone attacks sleeping, but Sirianni wants the birds to do just that.

Philadelphia’s newest head coach spoke about the message he’s trying to instill at camp and in his eight sentence answer, he said the word attack nine times.

“Stay focused on that day and improve just one percent each time out and move on from there,” Sirianni told the Eagles’ official website. “My message to the team is very clear: We attack every day. It’s a climb and we’re attacking every day,” he said. “We like to even break it down further than that.

Sirianni is picking up right where he left off in his introductory press conference when he was hired back in January. He struggled to explain how he was going to build a smart football team, but apparently, he’s figured that out, and that’s attack, attack, and attack some more.