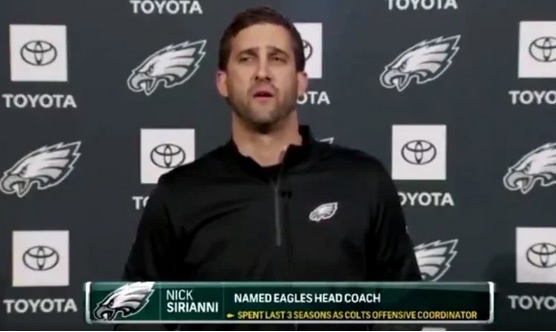 Eagles newly hired head coach Nick Sirianni has had a rough first week on the job.

Earlier this week after Sirianni was named head coach of the team an anonymous source immediately took a shot at him by saying he was “not super smart” and would likely end up being a “B-level coach” in the league.

From an NFL source familiar w/ Sirianni’s credentials as a HC:

“Good guy, solid candidate. Fairly smart but not super smart. Concern is he is likely to top out at a B-level coach for team that is in the mix to make the playoffs, but not a real SB chance. Low drama, even keel.”

Sirianni didn’t do himself any favors during his introductory press conference on Friday. While speaking to the media for the first time has the Eagles new head coach, Sirianni awkwardly stumbled while explaining how he was going to build a smart football team by simplifying the offense.

You’ve got to be kidding me pic.twitter.com/GWJUZKP1Ml

Just so I’m clear— you’re going to have a smart football team that doesn’t think. Did I get that right? #interviewswell https://t.co/gqDUg6FPyz

When you have to present to the class, but didn’t do the reading the night before. https://t.co/Mtv4Bpqy68

My man is up here giving a book report on a book he didn’t read. https://t.co/HU3cxV9luW

Me trying to explain the Game Stop scandal. https://t.co/vdQ1C2eSg2

Lmfao he sound like he just found out he had a presentation 5 minutes before class https://t.co/utcvB2S3SL

Step one of building a smart football team:

Not since Adam Gase's eyeballs has there been a worse introductory press conference for a head coach.

That includes any predictions of kneecap biting. https://t.co/Ayld3sIZz4