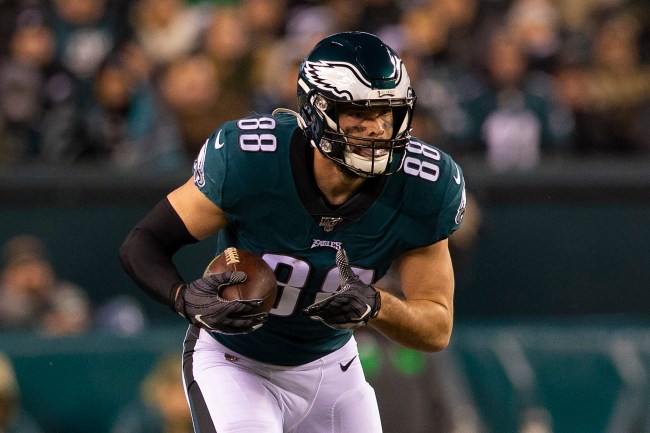 On Sunday, a video showing Eagles tight end Dallas Goedert getting attacked in an incident at a South Dakota restaurant on Friday made its way on the Internet.

According to several reports, Goedert was “sucker-punched” while out having dinner with his family and was later taken to the hospital for evaluation.

Per source, #Eagles TE Dallas Goedert was with family at a restaurant last night and was sucker punched unprovoked. He was taken to the hospital for evaluation and is fine.

Goedert was at the restaurant with his family when he was allegedly sucker-punched unprovoked, the person said. He was evaluated at a hospital as a precaution.

NJ Advance Media contacted the Eagles, who said they are aware of the situation but declined to comment.

According to the Mitchell Republic, the incident occurred at the Zoo Bar in Aberdeen, South Dakota, around 1 a.m. Police were called to the scene because of reports that “people [were] busting glasses and have busted heads.”

The video shows Goedert talking with a man face-to-face at the restaurant before a second man comes from out of nowhere to punch the Eagles tight end in the face.

This is the video of Dallas Goedert getting suckered punched in Aberdeen, SD.

Source is one of my best friends in college's (South Dakota School of Minesand Technology) BIL who knows the bar owner.@RapSheet @AdamSchefter @nflnetwork @richeisen pic.twitter.com/v0hMeMsKz5

The man was later arrested according to ESPN’s Tim McManus.

A suspect was arrested Saturday, per source. https://t.co/mC0HKOmbSF