Eagles Fans Are Climbing Gates, Poles And Are Burning Philly To The Ground After Super Bowl Win 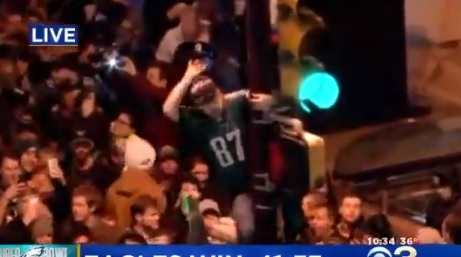 Earlier this week, the Philadelphia Police revealed that they were going to use grease oil to prevent people from climbing street poles in the city.

With all the excitement of the big game, Philadelphia police are stepping up security for the city to make sure we all stay safe. With the Crisco not working as well as they thought it would after the last game. Police are using something new —something you’re not going to want all over you—gear oil.

Regular gear oil is like the consistency of molasses. The guys over at Evans Gulf on Spring Garden know all about gear oil. They use it almost every day at the garage. They’re not big fans of the gooey substance.

“It’s thick. You can’t get it off your clothes. It smells and really tough to clean up.”

Sources say police plan to use a form of gear oil instead of Crisco oil to grease poles along Broad Street and up in the Northeast for Sunday nights expected Eagles celebration.

Tom Flora says fans should be aware if you’re planning on wearing your favorite Birds jersey and scaling up a pole with this stuff on it. Well, good luck trying to clean your jersey.

Nothing will stop Eagles fans from climbing the poles. pic.twitter.com/5eLsgqN5vy

Not only were Philly fans climbing polesm they starting climbing gates as well.

Oh yeah and some fires were started.