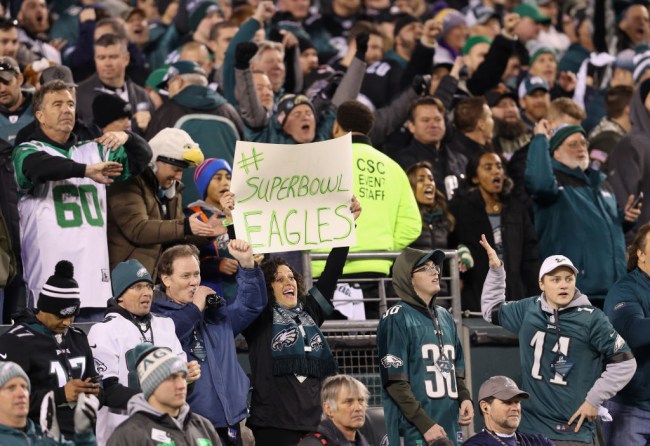 Last week, the Philadelphia police department warned everyone that they were preparing for fans to destroy the city if the Eagles were to make the Super Bowl.

“”Businesses in the area of Cottman and Frankford Avenues in Northeast Philadelphia — scene of past post-victory mass gatherings — are being advised to make sure their grates are down Sunday night and that anything outside, such as trash cans and flower pots, are brought inside,” the report said.

, Capt. Anthony Luca, commander to the 15th Police District, is asking bars to sell alcohol in plastic cups only and to refrain from selling takeout bottles. ‘The police will be enforcing open container laws,’ Luca said.

“No parking signs will be posted in the area effective from 3 p.m. Sunday through 3 a.m. Monday. Similar measures will be in place at the Sports Complex in South Philadelphia and on Broad Street, including the deployment of mounted police.”

Philly police even tried to slather poles up with Crisco grease to prevent people from climbing up poles.

The city of Philadelphia is greasing the town's light poles to prevent fans from climbing on them in the event of an Eagles win.

Unfortunately nothing that the police set forth worked because Eagles fans found creative ways wreak havoc in the city after the team beat the Vikings in the NFC championship game on Sunday.

Eagles fans pelting a Vikings bus with bottles, cans, whatever they can find to throw (la410rod_official/IG) pic.twitter.com/CmOWV5iZA2

it is a madhouse out there….lol….I love my city pic.twitter.com/0hDq8A6t8q

The only L taken in Philly tonight pic.twitter.com/bIWvidxh9l