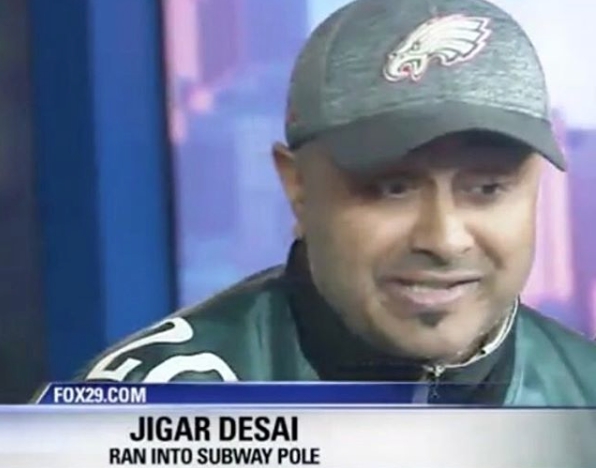 By now, every man, woman, and child in America has seen Eagles fan Jigar Desai get truck-sticked by a subway pole before his team’s decisive 38-7 win in the NFC Championship Sunday. The video has gone so viral and has embedded itself so deeply in the Eagles ascension to the Super Bowl, it has become an emblem to Philly fans. A source of pride. A true “that’s my guy!” moment.

Lets all take a few moments to watch it once more. We’re all in need of a little dopamine rush:

Put this Eagles fan in the concussion protocol pic.twitter.com/Zr6Y79pqrk

We now have a different angle of the Eagles fan nearly killing himself by running into a pole pic.twitter.com/V8Ghu1iMXJ

Jigar Desai, an Eagles season ticket holder, avoided a hospital visit but admitted to dealing with soreness in the days following the win.

Desai recently recounted the day that would ultimately lead to him becoming an internet celebrity. He told Deadspin:

I was pregaming at my brother’s place. He lives in South Philly. We watched the Pats-Jaguars game, then headed down to the Linc. And a train was leaving the Linc and going into Center City; we were waiting for a train coming on the platform across from it. And I just saw Eagles fans, and it got me all excited.

At the end of it, when I was running toward the train I just wanted to give a final “Go Birds!” to the folks that were there. And that’s when the pole made a great tackle.

Desai understands how things could have ended up much much worse.

I feel very fortunate and very lucky that nothing worse had happened. It’s a little bit of a blur for me. Yeah, I hit the pole, I was on the ground and I got right up. But after seeing that second video where I actually hit the subway train it made me rethink a lot of things. I am very lucky.

If there isn’t a statue of this guy running into the pole outside of Lincoln Financial Field by the beginning of next season, I have completely lost faith in the city of Philadelphia.
[h/t Deadspin]