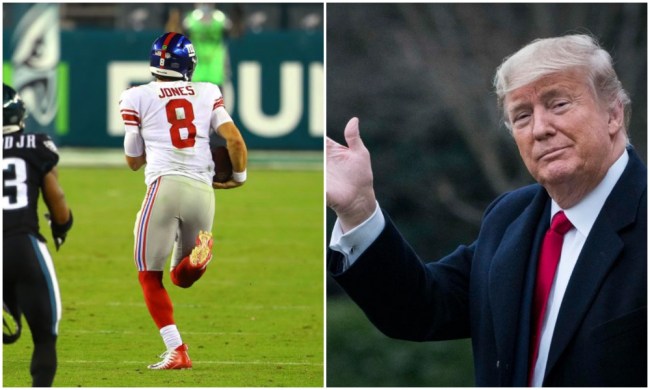 When it comes to TV ratings, the Giants-Eagles matchup was in a terribly tough spot on Thursday. Not only did the two teams enter the game a combined 2-9-1 on the year, but the final Presidential Election also started an hour after the opening kick.

According to ShowBuzzDaily, the ‘Thursday Night Football’ game between New York and Philly peaked with an average of 8.187 million viewers. While that number far surpasses the Thursday night ratings from the Jets-Broncos Week 4 matchup that drew in just 5.4 million viewers, it doesn’t compare to the 10.07 million that watched Tom Brady and the Bucs take on the Bears in Week 5’s Thursday night game.

The early ratings for Thursday’s Presidential Debate actually show an 11% decrease compared to the first debate according to CNN, but it still averaged 55.2 million viewers across the six big broadcast cable networks around the country.

The first Presidential Debate of the year took place on Sept. 29, a Tuesday, without an NFL game competing with it and drew in 62 million viewers across the six networks.

While it’s impossible to know if the ‘Thursday Night Football’ numbers took a drop because it was competing with a debate or it was simply due to the fact that the Eagles and Giants are nearly unwatchable on any given day, it’s likely a mix of both factors.

As for the drop in ratings between the first debate and the final debate, it probably has more to do with how offputting the first debate was and the fact that one-third of the country has already voted therefore they didn’t bother watching, not because people were more focused on the Eagles and Giants.

Nevertheless, it’s not time to panic when it comes to the NFL ratings. Two bad football teams playing the same night as a Presidential Debate is a tough situation.