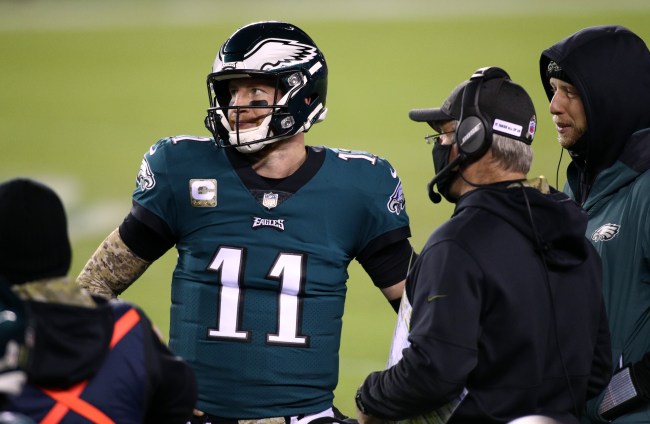 We’re starting to get a glimpse of the dysfunction within the Eagles organization days after Doug Pederson was fired as head coach and it’s not a pretty picture.

On Saturday, the Philadelphia Inquirer’s Jeff Mclane released an in-depth report about what went wrong in Philadelphia and it paints QB Carson Wentz as uncoachable that is being enabled by those in the team’s front office.

Inside Carson Wentz’s turbulent season and the forces behind his regression.

A perfect storm of organizational hero-worship, dubious coaching, injuries, poor roster management and Wentz himself led to one of the NFL’s worst-ever QB declines.

Wentz’s Type-A personality could be credited just as much for his past success. Many top quarterbacks share the same trait. But the 28-year-old had increasingly rebuffed advice, defied criticism, and clashed with former coach Doug Pederson last season, Eagles sources said. “Every great quarterback wants to be coached and they want to be coached hard and by the best, and it doesn’t seem like [Wentz] wants that,” one source said. “It’s kind of like whoever’s coaching him is working for him. But it can’t be that way.”

According to Mclane Wentz would go out of his way to make non-sensical excuses when called out by coaches on his errors in the film room.

In the quarterback room, when his errors were pointed out, Wentz would sometimes make irrelevant excuses and Taylor wouldn’t correct him. For instance, there would be a play when he didn’t throw to an open receiver. The read was drawn up as designed, the coverage played out as expected, and he would be asked why he didn’t pull the trigger. And Wentz would say the look wasn’t there, or he would overemphasize the pass rush, and when it was suggested the play be run again in practice as to get it right, he would object.

The report also states that the relationship between Wentz and Pederson was so toxic that Wentz would randomly kill his head coach’s playcalls just because he disliked him.

There was a disconnect even before Wentz was benched, though. Pederson would call a play only for his quarterback to occasionally kill it for no other reason than his personal distaste, sources said. It became “a pissing match” between the two, another source said. […] Pederson’s play-calling was also dubious. He would go long stretches without rolling Wentz out of the pocket to take advantage of his ability to throw on the move. Wentz, in turn, made “bizarre kills that made no sense and effectively was going rogue,” one source said.

As of now, it seems like the Eagles are going to be stuck with Wentz and his huge contract because it’s doubtful any team is going to want to trade for him.