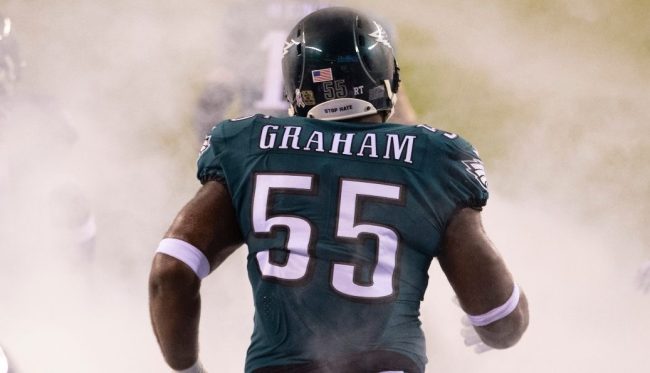 Hype season is officially here for the Philadelphia Eagles after the front office acquired a ton of talent. All eyes have been on the offense due to AJ Brown’s arrival. However, it sounds like more attention should be given to the Eagles’ defense as they’re making plenty of noise in training camp. Now, a true veteran of the team makes an eye-opening statement that should concern Philadelphia’s NFC East rivals.

Brandon Graham Believes This Is “The Most Talented” Eagles Defense

According to Matt Lombardo, veteran linebacker/edge rusher Brandon Graham claims this Eagles defense is completely loaded with talent. So much so, that he goes as far as to say, “this is the most talented defense I’ve ever been part of. It just comes down to us taking advantage of it.” If that’s true, then the Eagles could be a true powerhouse coming out of the NFC East.

This is a rather bold claim considering Graham has been in the league since 2010. He’s seen plenty of action through the years. Looking at the Eagles’ roster, it’s hard to disagree with him. They’re stacked within the defensive line, have stellar linebackers, and have one of the best secondaries in the league.

Additionally, after watching Jordan Davis blast through a teammate in the Eagles training camp, they could have one of the best defenses in the league. It’ll be interesting to see how the season plays out, as the NFC East has the potential of being competitive for once. Philadelphia is shaping up nicely, while the Dallas Cowboys aim to repeat for a divisional championship.

Look for the Eagles to be a contender, as it sounds like the defense is going to do their part. If Jalen Hurts develops into a franchise quarterback, then watch out for this team.