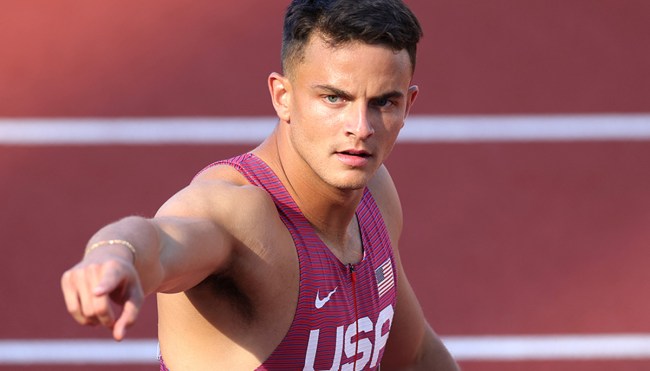 The world of sports is filled with some freakishly talented athletes who could seemingly dominate any competition they decided to partake in; there are guys like Bo Jackson and Deion Sanders who managed to play in the NFL and MLB, while others like Kyler Murray (the first person to be drafted in the first round by teams in each of those leagues) were ultimately forced to pick one to pursue.

The terrifyingly imposing D.K. Metcalf certainly fits that bill. Earlier this year, the Seahawks wide receiver outlined his plans to compete as a sprinter in the 2024 Summer Olympics and bounce back from his underwhelming performance at a qualifying event in 2021.

However, he’s not the only NFL player who can hold his own on the track.

Devon Allen was a four-star recruit who played at Oregon for three years before turning his attention to hurdling. However, he managed to make enough of a mark at a workout earlier this year to earn a contract with the Philadelphia Eagles.

That hasn’t stopped Allen from continuing to compete in track events, and his performance at the World Athletics Championships over the weekend was enough to earn him a spot in the finals for the 110m hurdles.

Unfortunately,  Allen was ultimately denied a chance to compete on the podium after he was disqualified for being too fast thanks to one of the more absurd technicalities you’ll ever encounter.

Devon Allen is disqualified from the men's 110m hurdles.

His reaction time was .001 faster than the .1 second threshold meaning he false started. #WorldAthleticsChamps pic.twitter.com/sIz6Pa1agy

The rules of the competition dictate that the hurdlers have to actually wait one-tenth of a second before they’re allowed to “react” to the starting gun and come off of the block. Unfortunately, Allen only allowed .099 seconds to elapse before taking off, which meant he was DQed over a single millisecond.

Here’s what he had to say about what went down via CBS Sports:

“I’m hungry for everything I do. My goal is to be the best hurdler ever and I still have a chance to do that, and my goal is to play in the NFL and help the Eagles win a Super Bowl right now.

There’s not really much I can do. It’s just one race, which is frustrating. Track and field is so difficult because you train a whole year for one race. It happens and I’ll learn from it.”