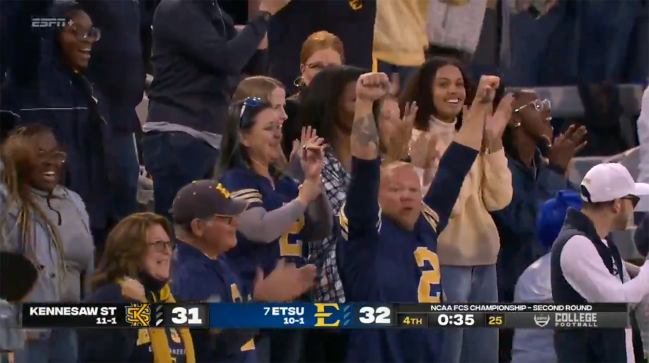 Despite being the higher seed, East Tennessee State football entered Saturday’s FCS Playoff game against Kennesaw State as two-point underdogs. It was set to be the biggest game in program history.

With less than two minutes left, the Buccaneers were not covering the spread, let alone winning. However, things changed in a hurry and ETSU pulled off an insane comebacks to advance to the quarterfinals.

The probability of a win for the home team was remarkable.

With five minutes and two seconds remaining in the fourth quarter, the Owls kicked a field goal to take a 31-17 lead. The Buccaneers received the proceeding kick and returned it out to their own 22-yard-line.

13 plays and 78 yards later, quarterback Tyler Riddell completed a 12-yard touchdown pass to Will Huzzie with one minute and 28 seconds left. The point-after attempt was good and ETSU cut the lead to seven.

With less than two minutes and only one timeout, there was not enough time to force a three-and-out. If Kennesaw Staet got the ball back, they would be able to kneel out the clock.

But they didn’t. The Bucs recovered the onside kick and had 1:26 to tie or win the game and they only had to go 48 yards.

Head coach Randy Sanders had a decision to make. An extra point would tie the game with 35 seconds left, while a two-point conversion would put his team ahead by one. He chose the latter and it worked.

ETSU proceeded to kick it deep. Kennesaw had 28 seconds to go 73 yards but was unable to do so. The Buccaneers won the game.

The insane comeback was historic. East Tennessee has reached the quarterfinals for the first time in school history but will face a mighty giant in No. 2-seed North Dakota State for a chance at the semis.

Regardless of next week’s result, what happened against Kennesaw on Saturday will forever live in history for the Buccaneers. Unreal.