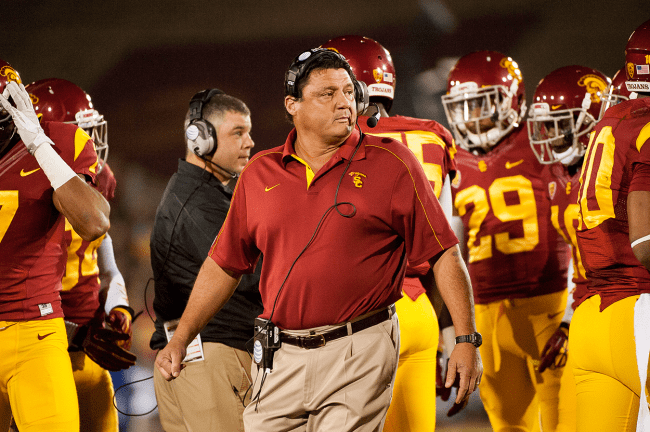 Ed Orgeron is back in Los Angeles to watch Ja’Marr Chase and Joe Burrow in the Super Bowl and he is enjoying his time in his old stomping grounds. He joined the Dan Patrick Show on Friday to discuss a myriad of topics.

Among them, Orgeron talked about the wild way in which he tried to recruit Adrian Peterson to USC and told a crazy story about Mississippi State hiding a recruit from him at Ole Miss.

To begin the conversation, Patrick asked how Coach O liked being back in California. In response, Orgeron said that he was glad to be back and that he misses both the weather and the people.

Obviously, the weather speaks for itself. As for the people, Orgeron said that he has a unique perspective on The Golden State because he was recruiting the area during both of his stints at USC and got to know good folks from all over the state.

That led Patrick to ask about his time on the recruiting trail. Specifically, he wanted to know how Orgeron would “close” recruits.

Coach O’s answer was hilarious, because it wasn’t entirely true.

Orgeron said that he and Pete Carroll would meet the recruits in Manhattan Beach on Sunday morning. They would take them down to ‘The Strand,’ which is the most famous beach-front stretch of land in Southern California, and would show them the pier.

While they were down there, Orgeron would take each individual recruit out for a 1-on-1 walk along the beach. During the walk, he would point out different houses along the way, from Kobe Bryant, to movie stars, to anyone notable in between.

However, Coach O wasn’t actually sure who lived where and would make it up because it sounded good. To his credit, even though he may not have been exactly right with what celebrities lived where, many of the houses along ‘The Strand’ belong to some pretty famous folk.

Hear Orgeron explain how he would close recruits in his own words: