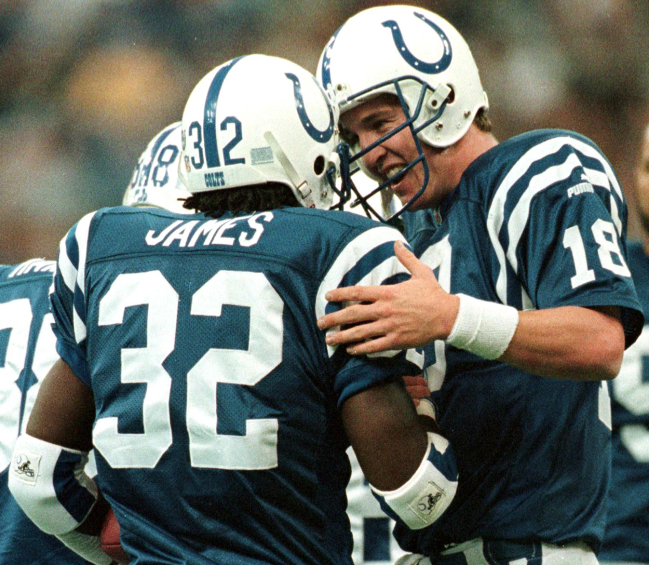 Edgerrin James and Peyton Manning spent six years together in the Indianapolis backfield. The two former top-five picks played alongside one another with the Colts from 1999 to 2005 and absolutely tore up the AFC.

Although they never reached the Super Bowl while on the same team, they did not win less than 10 games but for one year during that stretch. Indianapolis was a force to be reckoned with and it was largely because of James and Manning’s production.

Well, the NFL Hall of Fame running back is predicting another James/Manning connection in the National Football league. And it would be pretty cool if it came to fruition.

On Thursday, Arch Manning, Peyton’s nephew, committed to play for Texas as part of the Class of 2023. Meanwhile, Class of 2022 running back Eden James, Edgerrin’s son, is gearing up for his freshman year.

Eden, a three-star prospect, committed to play for Howard over offers from the likes of Indiana, Air Force, Army, Miami, Temple, Wake Forest and others. He runs just like his dad and at 5-foot-10, 180 pounds, he is well on his way to a successful career.

After enrolling early and participating in spring practice with the Bison, Eden looked like a problem for opposing defenses during the spring game.

Edgerrin James , who knows what it takes to get to the next level, believes his son Eden will have no problem making it to the league.

To go one step further, Edgerrin predicts that once he gets there, Eden will play alongside Arch Manning. Just as he did Peyton Manning.

Neither Eden nor Arch will be in the league until about 2026, at the earliest. Stay tuned!