Elena Delle Donne Rips WNBA: ‘I Can Either Risk My Life… Or Forfeit My Paycheck’ 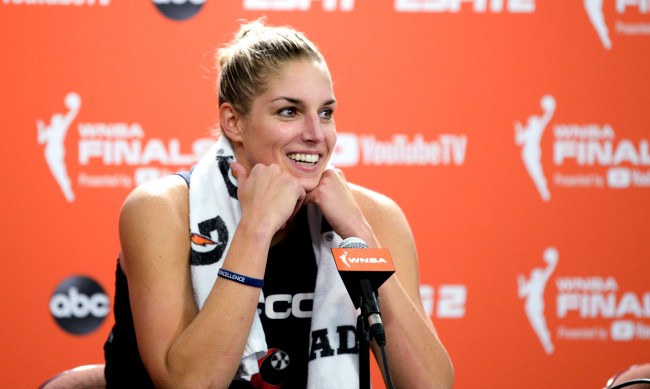 While several WNBA players have been sharing pictures of the less-than-stellar living conditions they are dealing with inside their bubble at the IMG Academy, Washington Mystics star and two-time WNBA MVP Elena Delle Donne is wondering if she were to join them in Bradenton, Florida would she be risking her life?

The reason for her concern is because for the past 12 years Delle Donne has been battling Lyme disease and therefore has a compromised immune system.

She has to take a mind-boggling 64 pills a day to treat her condition and yet, when she filed a request for a medical exemption so she could opt-out of the WNBA’s shortened 22 game season and still receive her salary, it was rejected.

On July 8, Delle Donne, who led the Mystics to the 2018-19 WNBA Championship, revealed on Twitter that she was “following protocol and waiting for a risk assessment from the league medical panel.”

On Monday, Delle Donne revealed in a statement to ESPN, “The independent panel of doctors the league appointed to review high-risk cases have advised that I’m not high risk, and should be permitted to play in the bubble.”

She also added, “My personal physician who has treated me for Lyme disease for years advised me that I’m at high risk for contracting and having complications from COVID-19.”

Although Lyme disease isn’t mentioned by the CDC as a condition that would place an individual at “high risk,” [Delle Donne’s agent Erin] Kane told ESPN that the Mystics’ team physician, Dr. Anne Rettig, sent a letter to the medical panel advising it that Delle Donne was cleared to play but noting that she should be considered “higher risk.”

Decisions by the medical panel are final, and players have no ability to appeal, Kane said.

On Wednesday, Delle Donne published an article on The Players’ Tribune that further explains her plight.

“I take 64 pills a day, and I feel like it’s slowly killing me,” she began. “Or if it’s not killing me, directly, then I at least know one thing for sure: It’s really bad for me. Longterm, taking that much medicine on that regular of a regimen is just straight-up bad for you. It’s literally an elaborate trick that you play on yourself — a lie that you tell your body so it keeps thinking everything is fine.”

Delle Donne went on to explain, “When the league began reviewing players’ cases to see who should be granted a health exemption from the bubble (meaning the league excuses you from playing, but you don’t have to give up your salary), I didn’t even think it was a question whether I would be exempt or not. I didn’t need a panel of league doctors to tell me that my immune system was high-risk — I’ve played my entire career with an immune system that’s high-risk!!!”

After the league’s panel of doctors, none of which spoke to Delle Donne or her doctors, rejected her request, she realized, “I’m now left with two choices: I can either risk my life….. or forfeit my paycheck.”

So really all I’m left with is how much this hurts. How much it hurts that the W — a place that’s been my one big dream in life for as long as I can remember, and that I’ve given my blood, sweat and tears to for seven going on eight seasons — has basically told me that I’m wrong about what’s happening in my own body. What I hear in their decision is that I’m a fool for believing my doctor. That I’m faking a disability. That I’m trying to “get out” of work and still collect a paycheck.

That’s why I played in the finals last year with THREE HERNIATED DISCS IN MY BACK.

That’s why I work out during the seven months a year when we’re not in season, when no one’s watching me, when I’m not collecting my player salary.

That’s why I’ve crammed my 6’5” body into so many coach class flights that I almost forget what it’s like to have legs and feet that aren’t dangerously swollen.

Because I’m the type of player who makes up a condition to avoid playing basketball.

While admitting that her problem isn’t as big as many others in the world are facing right now thanks to the pandemic, she finishes by stating, “We can never fully understand what someone else is going through, or what they’ve been through — in the same way that no one else can fully understand what we’re going through, or what we’ve been through. There’s so much in the world that we don’t know.

“Which means the best that we can do is to listen to each other, and to learn from each other — with as much humility as possible.”