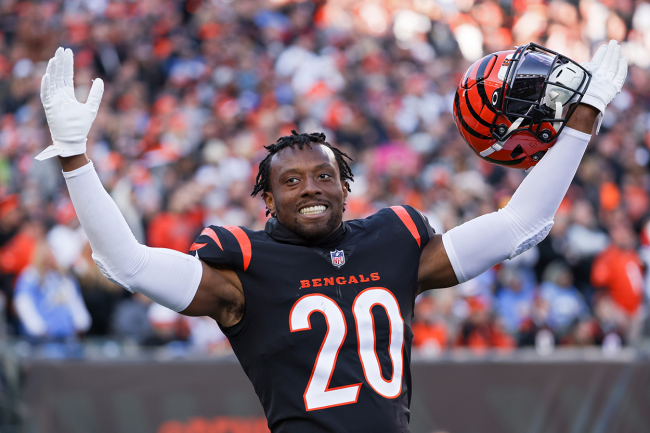 Over the course of the last few seasons, Eli Apple has become the butt of many jokes. That does not appear to be any different in 2022.

Apple, who is quick to trash talk his opponents, their talents and their cities online and on the field, gave up the game-winning touchdown during the Super Bowl this past February and got roasted. To make matters worse, his lowlights video went viral after he got beat over and over and over again.

The 26-year-old former first round pick has spent time with the Giants, Saints and Panthers before landing in Cincinnati to play with the Bengals last fall and again this year. He is off to a rough start.

During training camp on Thursday, Ja’Marr Chase burned Apple over the middle for a 60-yard touchdown. As the former LSU wide receiver ran into the end zone, he turned to the cornerback and high-stepped his way across the goal line like Deion Sanders.

Apple got absolutely cooked and Chase danced all over his grave.

Unfortunately for Apple, it was not the last time that he would be scored on. He got beat again on Friday.

With Joe Burrow out for an appendectomy, backup Brandon Allen is taking first-team reps for Cincinnati this week. He got pushed out of the pocket in a goal line situation and found Stanley Morgan in the corner of the end zone. Morgan proceeded to make a great catch and scored.

To get to that point, Morgan had to come all of the way across the field and beat his coverage. The guy that was on him? Yep, you guessed it —

Eli Apple got torched once again and gave up the touchdown.

Stanley Morgan beats Eli Apple on a drag and caps it with a terrific catch as Trey Hendrickson gives chase on B. Allen. pic.twitter.com/tyh8DKfMjC