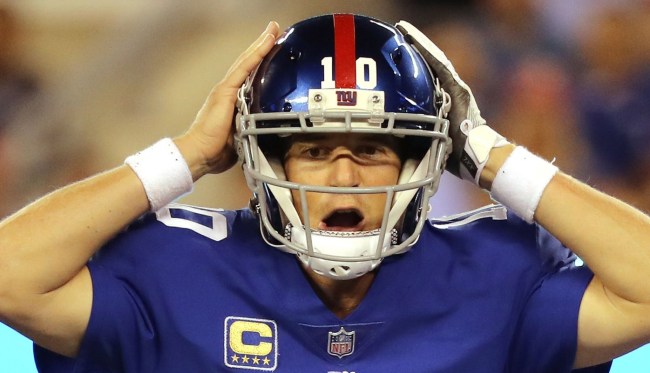 Back during Eli Manning’s prime, I would often compare the New York Giants’ legendary quarterback to Forrest Gump.

Similar to Tom Hank’s beloved movie character, Eli Manning would often find himself in momentous situations with no idea of how he got there or what he was going to do next, and yet, he still always found a way to succeed. Both men adopted ye’ old “close your eyes and hope for the best” strategies and it worked for them like gangbusters.

To be perfectly clear: what I just said is a massive compliment and is in no way meant to be disrespectful to my guy Eli.

As a Jets fan, Eli Manning — a New York Giant — is responsible for the two most joyous moments of my footballing fandom, as he was the kryptonite to Tom Brady’s reptilian Superman not once, but twice. I wish I could effectively spray and pray my way through life the way Eli Manning does — after all, you can’t predict what someone is going to do if they don’t even know what they’re going to do. Even Darth Belichick, widely regarded to be the greatest football coach of all-time, couldn’t slow down the Manning machine.

Unfortunately for all of us, though, Eli’s time as the Football Forrest Gump may have finally come to an end, as the Giants named rookie Daniel Jones their starting quarterback earlier in the week.

And because Eli Manning is class personified through and through, he imparted some sage wisdom on the young rookie quarterback that will likely propel Jones to two decades of NFC East domination: throw it to your own team.

Eli Manning’s advice to Daniel Jones: “Throw it to the guy wearing the same jersey you are. Simple. pic.twitter.com/wOHfGWnt6w

There you have it, folks, it’s really that easy: look at field, see player, analyze color, throw ball — those are the four quarterback commandments of two-time Super Bowl champion Eli Manning.

Do with that knowledge what you will, Daniel Jones, but just know, no matter how hard you try, you’ll never be as good as New York City’s forever GOAT: Eli. Fucking. Manning.