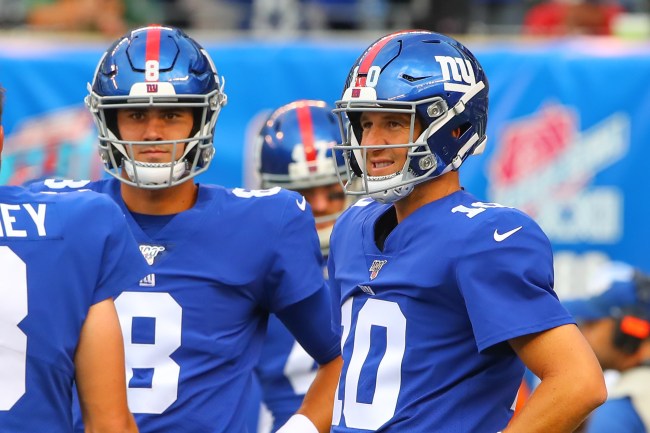 The Giants went to the nation’s capital on Sunday and walked away with a 41-35 overtime win over the Redskins. While the result may ultimately mean a worse draft pick for New York and depending on who you ask (me) the Giants should’ve tanked the game, they decided to take that winning feeling to a bar.

We’re not talking about some high-class establishment or anything, we’re talking about a crowded bar in Hoboken where you can get your flip cup on. It definitely looks like the boys jumped right off the plane and went straight to the bar given their button-down look.

There’s nothing to see here, just a video of Eli Manning and Daniel Jones playing a game of flip cup #GiantsPride pic.twitter.com/PJtL7tAi7O

According to our own Hoboken resident and bar frequenter, Eric Italiano, the name of the bar is Green Rock.

There is a lot going on in this video even though it’s just 11 seconds long.

First off, that’s Alex Tanney at the start of the video that ‘successfully’ flips his cup, but upon further review, he actually cheated his ass off and flipped the cup with his other hand helping.

Tanney isn’t the only one under question, though. Manning attempts a flip then simply picks it up and places it upside down like he pulled it off, again, cheating. When a two-time Super Bowl MVP does that though, you don’t really question it.

Meanwhile, while all of this awful cheating is going on, Jones is really struggling and eventually flips his cup clear off the table. This is a move you never want to make in flip cup, it catches everyone’s attention that’s watching because you look like the worst player in the entire room, which the Giants definitely saw it happen as they rip on the rookie afterward.

Everyone at the table is bad at flip cup, but as far as who we should be most disappointed or surprised by has to be Manning. We’re talking about a former Ole Miss quarterback here. I know he may be rusty, but he’s probably played more flip cup over the years than 99% of anyone that is reading this story.

Nevertheless, it’s awesome to see these guys out at the common man’s bar on a Sunday night just being dudes.