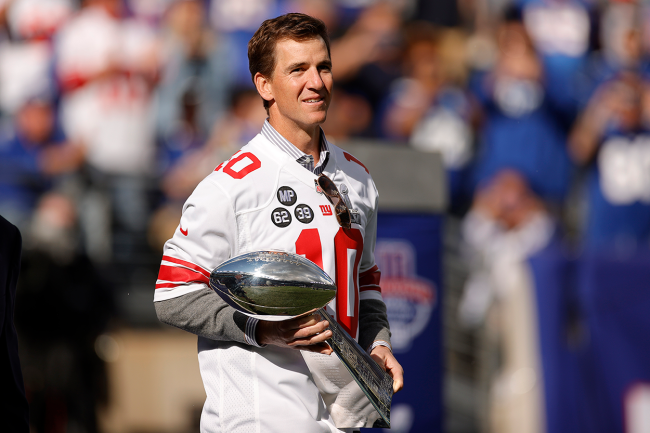 Eli Manning, based solely on Super Bowl wins, is the greatest quarterback in Giants history. The former No. 1 overall pick who was traded from San Diego to New York on draft night, is the only quarterback in the organization’s history with two rings.

As a result, he should be headed to the Hall of Fame when he becomes eligible in a few years.

In the meantime, Manning is enjoying retirement. The 41-year-old has his own show on ESPN+, co-hosts the Monday Night Football simulcast alongside his brother Peyton and has multiple commercials airing on national television.

He also recently out-juggled his nephew Arch and injured himself while attempting the Giants training camp conditioning test. Manning is all over the place.

On Tuesday, the 16-year quarterback in New York stopped by his former organization’s training camp in East Rutherford, New Jersey.

While at training camp, Manning took some time to mentor his former understudy, Daniel Jones. The team has high hopes for the fourth-year quarterback to take a big jump in 2022 and there is no one who knows what it takes to win a Super Bowl like his former (and current) mentor.

Look who stopped by today

In addition to his time with Jones, Manning closed out practice by speaking to the entire team. His speech, though short and sweet, was profound. He had the full attention of every player on the Giants and his message goes beyond the gridiron into every day life.

Although Manning is speaking specifically about football and what it takes to get better and win, the sentiment reigns true for us non-NFLers. Focus on what you can control, learn from mistakes, and be better tomorrow than you are today.