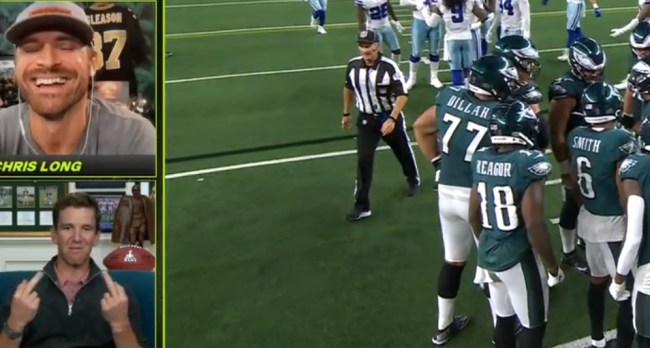 Eli Manning had to make an on-air apology during Monday Night Football’s Manningcast.

In the fourth quarter of the Eagles-Cowboys game, the Mannings brought out Chris Long as a guest. While talking about rabid Eagles fans Eli put up double middle fingers to show how they would greet him in Philly.

“You go to Philly and you get the double bird right away from a nine-year-old kid, I would give the bird, can we do that? I’m sure you can blur that out ”

Eli Manning with the double bird on live TV. 😂 pic.twitter.com/LPU41kdFVO

When the Mannings came back from commercial, Eli apologized for giving the double bird on live TV.

“Sorry, earlier I gave the double bird, I guess that’s frowned upon so I apologize if I offended anybody, that’s just what a 9-year-old did to me and I thought I could do it back”

Eli Manning apologizes for the double bird while Chris Long laughs through it. pic.twitter.com/s5kLwXS6zZ