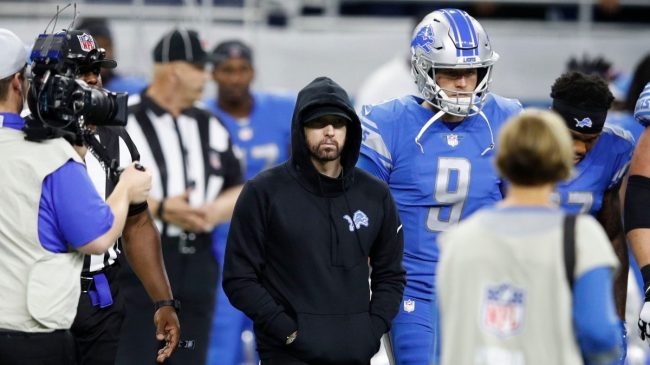 HBO’s Hard Knocks is coming to an end as the Detroit Lions are about to begin the regular season. In the final episode, Eminem makes a surprise appearance to wish the team good luck for the upcoming football year. However, he makes a wild claim and it’s the boldest thing we’ve heard all year.

Eminem Claims He Can Play Any Position For The Lions

The Lions Twitter account shared a sneak peek of the final episode of HBO’s Hard Knocks. Eminem is seen standing on the sideline mingling with the coaching staff before talking with some of the players. During his conversation, M claims he can “play any position.” And goes as far as to say, “any position, I’m great.”

We'll keep you in mind, @eminem

Catch the season finale of #HardKnocks on Sept. 6 on @hbomax!

I don’t know about you, but the Lions should have taken Eminem up on that offer. How hilarious would it be for Dan Campbel to say something like, “Okay, lace them up and we’re going to have you play left tackle for a series.” What is Eminem even thinking? Perhaps he’s just trying to be funny for the players. However, considering he’s just 5’8″ and maybe 160 lbs soaking wet, there aren’t many positions he’d be successful in.

Eminem is great on the mic. There is no question about that. The football field though is a completely different story. We don’t even know if he’s even played sports before in his life. But hey, when you’re considered one of the greatest rappers of all time, maybe you feel like a superhero. I just wish I had some of his blind confidence as well.

Either way, keep an eye on this Lions team, as they clearly have big hopes for the upcoming season.