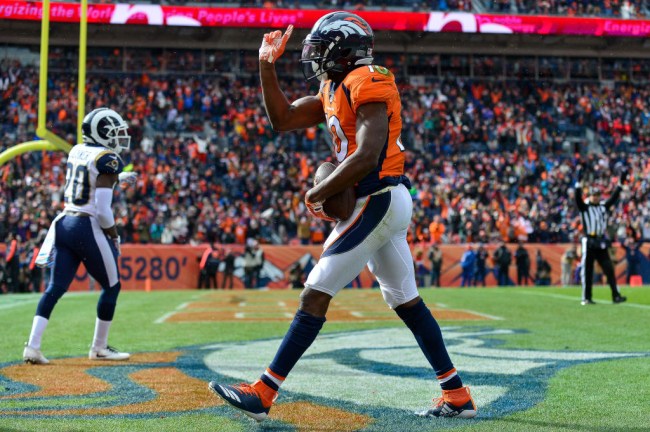 An Emmanuel Sanders taunting penalty late in the first quarter could very well have been the difference between a Denver win and loss. The Broncos’ wide receiver caught a 44-yard catch Sunday over Rams’ cornerback Troy Hill that was initially ruled a touchdown. Sanders then approached Hill pointing a finger in his face as an exploitation tactic. Sanders earned himself an unsportsmanlike penalty and upon further review, the play was ruled down at the 1-yard line, with the penalty bumping the Broncos back to the 16. They would have to settle for a field goal after two rushes and an incompletion.

Lol Emmanuel Sanders with the most obvious taunting penalty ever…

And he was ruled down at the 1, so Broncos had to go back to the 16 and settled for a field goal. pic.twitter.com/Ao27rhq7gO

If you can’t tackle a quarterback without taking him out to dinner and a movie first, you certainly can’t expose a defender to this degree. Taunting is a lame rule and no one would have given two shits if it wasn’t called, but rules are rules and that was your prototypical taunt.

After the game, the two-time Pro Bowler voiced his disapproval of a call he deemed “soft.”

“To me, it feels like the league has gotten soft,” Sanders said, via Nicki Jhabvala of The Athletic.

“It was a great throw by Case. I came down with a big play, emotions are high. … It’s not like I walked up to him and head-butted him or something crazy. But it cost my team.”

Said Sanders: “When I look at the scoreboard — we lost by three points — I feel like we could have easily punched that ball in, got four [more] points. I don’t see the penalty in that. … I’ll learn from it. … I’ll keep chugging along.”

The penalty marred a milestone day for Sanders, who secured the 500th catch of his career on a seven catch, 115 yard day.