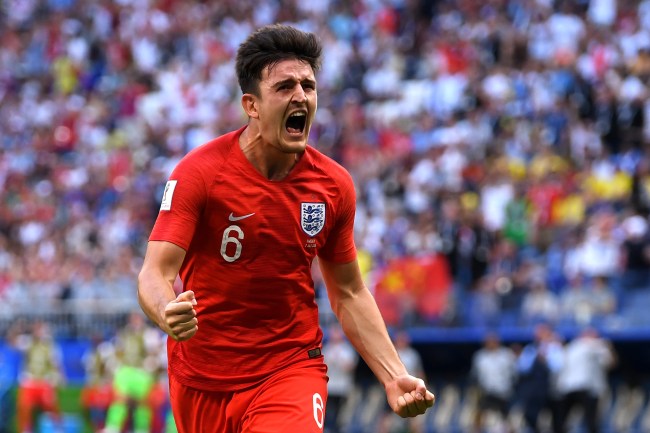 The Three Lions have re-shaped the minds of England fans throughout the 2018 FIFA World Cup. The team’s reputation is always coming up short in the big games. It’s what they do. But not this young squad chock full of the Premier League’s best. When they look to be on the brink of collapse Harry Kane finds a way to score a last-minute goal (Group Stage vs Tunisia).

England‘s squad has some of the best goal strikers in the Premier League. My man Harry Kane is the purest goal scorer in England’s top league (I’m a Spurs fan by the way, sorry for being a homer). They’ve got Raheem Sterling, Dele Alli, Danny Welbeck, Jamie Vardy, and Marcus Rashford. Not quite the embarrassment of riches you’d find on the French squad but they’ve got some major threats. One person on the squad who isn’t necessarily a threat to score goals in every game? 25-year-old Defender Harry Maguire who plays on Leicester City.

Harry Maguire only had 2 goals in the 2017 season with LCFC but he managed to put one away in England’s game against Sweden, and in doing so one fan had to pony up and get a hilariously awful tattoo of Harry Maguire’s face. Here’s how it all went down:

If @HarryMaguire93 scores against Sweden, he's face is getting tattooed on my chest!! #itscominghome #twitterblades #sufc

Right just to update everyone. @HarryMaguire93 face will be getting tattooed on me tomorrow!! Deposit has been paid. Let hope it turns out good! #twitterblades #ItsComingHome @JoeMaguire8

He went through with it, and it’s certainly something to look at:

Here it is. @HarryMaguire93 you beautiful bastard!! Once swell gone down more detail will come out. Got to go back next week to finish fine detail!! @JoeMaguire8 @_lozmaguire pic.twitter.com/eER7DOX6Af

I’d say that if England wins their next two games and are the 2018 FIFA World Cup champions then that tattoo was 100% worth it for that diehard fan. If not, methinks he might regret that in about 4, 8, 12, or 16 years.

By the way, if you’ve been seeing ‘Football’s Coming Home’ or ‘It’s Coming Home’ from England fans for weeks and aren’t sure what that’s all about, here’s the origin story: