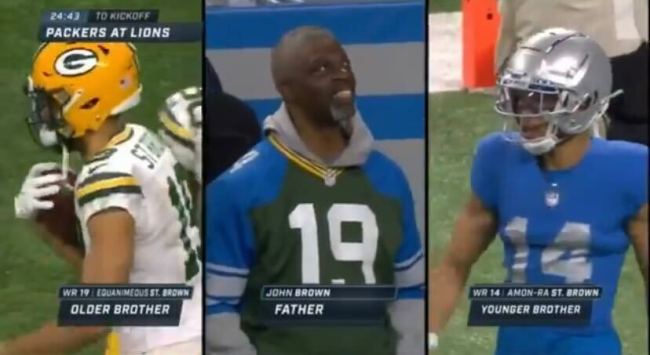 Sunday’s game between Green Bay and Detroit marked the second time that the St. Brown brothers played against one another in the NFL. Equanimeous, a receiver for the Packers, is three years older than his brother Amon-Ra, a rookie receiver for the Lions.

With both of their sons playing on opposite sides of the field, Mr. and Mrs. St. Brown were rooting for offense. As both St. Brown receivers took the field in Detroit, their parents were in the Motor City to support their sons.

Because they couldn’t support one son over the other, they both had their own custom, dual jerseys.

Their father John, who was on the field before the game, represented Equanimeous on the front and Amon-Ra on the back. Also, the fact that his name is just “John” is hilarious.

Their mother rocked the opposite— Amon-Ra on the front and Equanimeous on the back.

Mom has the opposite split lol pic.twitter.com/SjOlBoXqKJ

It was awesome. They both brought the family drip.

To make the day even better, Amon-Ra made history with his fans in the stands. After breaking the Lions’ record for most catches in a single season by a rookie a few weeks ago, he became the team’s rookie leader in single-season receiving yards.

He also caught a touchdown in the first half.

The rookie sensation! Fourth straight game with a TD for @amonra_stbrown

Naturally, his parents, while supporting both their sons on their jerseys, were thrilled.

When your sons are facing each other ❤️@amonra_stbrown @Equanimeous

Amon-Ra has been so good of late that the NFL “randomly” selected him for a drug test. He laughed in the league’s face.

Although the younger St. Brown had the better day, what an incredible experience it must have been for them both, and their parents!