Lions WR Amon-Ra St. Brown Laughs At The NFL After Being Selected For A ‘Random’ Drug Test 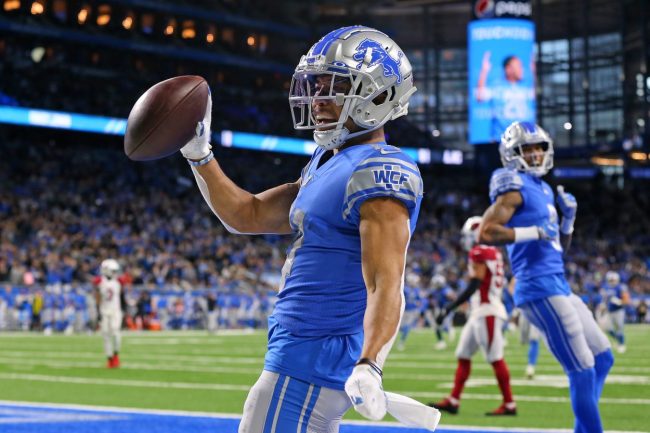 Lions rookie Amon-Ra St. Brown has been one of the most productive wide receivers in the NFL over the course of the last three weeks. Now the league wants to test his urine.

St. Brown, a 22-year-old out of USC, was drafted in the fourth round of the 2021 NFL Draft. His coming out party came in week four with six catches for 70 yards against the Bears and he has been consistent ever since.

During Sunday’s remarkable win over Arizona on Sunday, the Detroit rookie recorded eight catches for 90 yards and a touchdown. He was the team’s leading receiver and fell four yards short of being the game’s top pass catcher.

St. Brown was impressive in the upset victory and got jiggy with it after finding pay dirt.

Maybe a little bit too impressive… at least, in the eyes of the NFL.

After the game, St. Brown received a text from the league that indirectly questioned his talent. The 6-foot-0, 197-pound receiver was selected for a “random” urine test that will determine whether he is taking a performance-enhancing substance.

All St. Brown could do was laugh out loud at the irony.

The idea of the NFL issuing a “random” PED test after a player comes off of a good performance will never not be funny. It couldn’t be less random and it couldn’t be more obvious.

When you ball you get the call 😂😂😂 https://t.co/gufAeH2ODP

St. Brown has already set the Lions’ rookie record for catches with 65. If he keeps up this pace, he’s going to be peeing in a cup every Monday.