Eric Reid’s Convinced The NFL’s Blatantly Against Him, Is Adding Questionable Fine To His Collusion Case 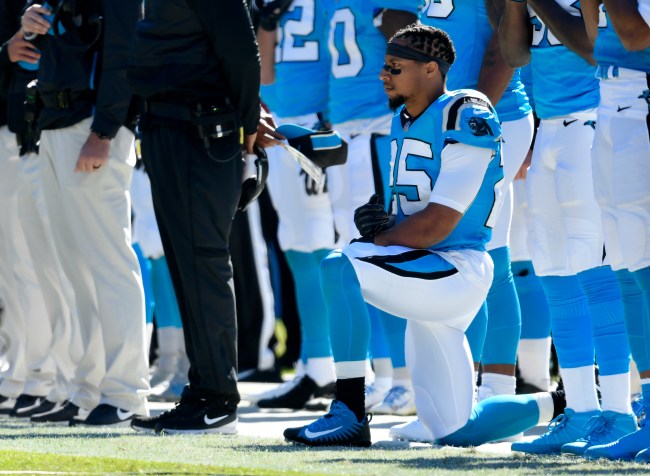 Eric Reid, safety for the Carolina Panthers, has made it pretty damn clear that he thinks the NFL has it out for him. And his latest, very questionable, fine for a hit against the Tampa Bay Buccaneers a couple weeks ago is just the most recent example.

For those who may have forgotten, Eric Reid, and other players, believed that the former Pro Bowl defender was being blackballed by owners and/or the league because of his protesting of the National Anthem by kneeling. Reid, alongside former teammate, Colin Kaepernick, often served as the posterboys for the league in relation to the quiet protest before kick-offs, which led to a collusion case that is currently ongoing between the two players and the NFL.

While the Panthers finally did sign Reid off the street back in September, that hasn’t silenced some of the noise and/or drama surrounding him.

According to FTW.USAToday, Eric Reid’s decision not to drop his collusion case after being picked up by Carolina, has led him to think that the league is watching him much more closely. And the aforementioned hit a few weeks ago — which resulted in a $26,739 fine — is now part of Reid’s ongoing case against the league.

Panthers S Eric Reid talking w/ NFL appeals officer today on $26k fine for unflagged hit on Bucs WR Adam Humphries. 3rd time Reid has been fined.
"It’s blatant at this point. I think everybody can see it. That’s a play that wasn’t flagged on the field. I hit him in the chest."

Eric Reid also says he's adding these on-field fines to the file in his collusion case vs. NFL.

The questionable play against the Buccaneers didn’t even warrant a penalty flag during the contest, which is one of the major reasons why Eric Reid truly believes the league office is gunning for him at this point. He already had a $10,000 fine rescinded from a hit earlier this season, but is making it clear that he smells something fishy with the amount of fines he’s being accessed.

Here’s the hit from the Tampa Bay game, which, again didn’t receive a flag on the field.

This is the hit that Eric Reid was fined for. $26,739. Thoughts? pic.twitter.com/abcOO1FQyJ

Who knows if Eric Reid’s claim is true or not, but considering it’s been reported that he’s been randomly drug tested an extreme amount of times, it does seem as if the league is trying to make an example out of him for his kneeling. The safety is also appealing this latest fine, so it’ll be interesting to see how all this turns out.